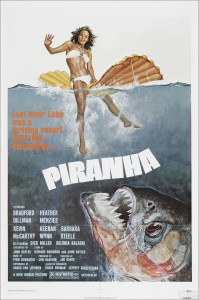 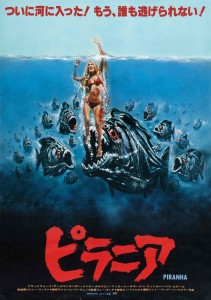 It’s well-known that Roger Corman’s films provided a fish hatchery of sorts for many great filmmakers of the ’70s and beyond. Piranha happens to be the first screenplay written by notable writer/director John Sayles, and his script is what sets Piranha apart from the average low-budget horror film. The plot is incredibly well-structured, leading us naturally from one fun scene to the next. And when I say “fun scenes,” I mean it. A normal person might not call a group of pre-teen children getting assaulted by flesh-eating fish “fun,” but then no one ever accused me of being normal.

But I guess if I’m going to call that scene out specifically, which is largely dialogue-free, I must also give a lot of credit to the film’s director and co-editor: Joe Dante. Piranha was his second film (and first as a sole director) and he is able to deliver both thrills and laughs, oftentimes simultaneously. This is a skill that would later serve him well as director of The Howling, the Gremlins films, Innerspace, and one of my personal childhood favorites The ‘Burbs. Sayles definitely laced the script with the satirical humor, but Dante executed it perfectly.

If you’re the right kind of movie fan, Piranha is great, glorious fun. The films of Roger Corman are a major blind spot in my viewing, and with each passing film I see I become more and more of a fan. Corman’s films may be low-budget, but they are well-made, interesting and a whole lot of fun.