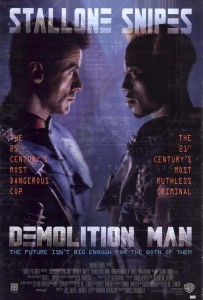 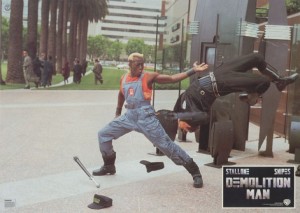 Even when I was a teenager going through my “modern movies are awful” phase, I still harbored a deep love of this movie. Stallone plays the requisite, misunderstood badass that he always does and, of course, he’s perfect as Spartan. That’s to be expected. What really elevates Demolition Man beyond many other sci-fi action films of the ’90s is the character of Simon Phoenix, and Wesley Snipes’s portrayal of him. Snipes is gleeful, charming and electric as the criminal. Snipes is also given some great opportunities to show off his martial arts skills, which are even more impressive than I remember then being (even if the editing isn’t always the best to showcase these sorts of martial abilities).

Stallone initially wanted Jackie Chan in the role of Phoenix (which would have pre-dated his breakthrough in America with the 1996 stateside release of Rumble in the Bronx), but Chan refused because he has a thing about not playing villains. As much as I love Jackie, Snipes is infinitely better suited to this role than Chan would have been, and I’m glad it worked out the way it did. Alternatively, Demolition Man could have also been a struggle between Steven Seagal (as Spartan) and Jean-Claude Van Damme (as Phoenix). I can’t say that version would have been better, but I do have a sinking feeling knowing that I’ll never see one of my favorite dumb action movies.

The one predominant feeling I had while watching Demolition Man this time was that it felt like a twisted, future Batman film. The music was composed by Elliot Goldenthal, who also composed the scores for Batman Forever and Batman & Robin. This is prior to both of those films, but the score here is oddly similar and evokes a real ’90s Batman vibe. Simon Phoenix also feels like a Batman villain at times, like a different version of the Joker or something. I don’t really have much to say about this other than, “It felt like a Batman movie,” but it did get me thinking about how insane it is that no one has made a totally futuristic Batman movie yet. Think about it: Batman’s all about wild tech and gadgets, and SO IS THE FUTURE! Minds would be blown at the sheer amount of incredible future tech on display! You think James Bond is badass with ejector seats? Imagine Batman with crime-fightin’ lasers and neural implants! Speaking of which, at one point Phoenix gets ahold of what can only be described as a gun that fires a blue version of the Ghostbusters’ ghost-busting stream! I don’t get it… people don’t like this movie?

If I must, I can see that many of the situations in Demolition Man are highly convenient and “dumb.” The key thing, though, is that they are always fun. Demolition Man is a film unafraid of its sense of humor and it delivers almost as many laughs as it does explosions, shattered glass windows and bone-crunching fights. The film is definitely carrying a ’90s vibe even if it is set in 2032, but it’s surprisingly well-made and entertaining. I won’t go so far as to call Demolition Man a classic, or even a truly great action film, but what it does, it does very well. Action fans of all ages and generations should be able to enjoy the madness on display in Demolition Man.

Be well, friends, and enhance your calm, Demolition Man is great fun. Hollywood should take a page from this one and defrost a perfectly preserved ’80s action hero to save the modern action film!

And let us not forget that Demolition Man provided us with one of the greatest questions in the history of cinema, still pondered and thought about in university classrooms, back alleys and Internet forums to this day: How do you use the three shells?

Demolition Man is the Large Association of Movie Blogs’s (LAMB) Movie of the Month! Head over to the LAMB site for more reviews of the film, as well as the LAMBCast podcast discussing the film!