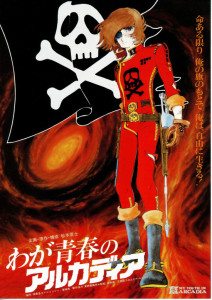 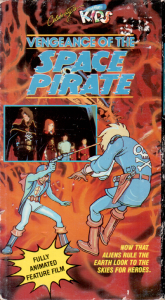 As the title implies, a big portion of the film revolves around the Arcadia, both as Harlock’s spaceship and as a concept of nostalgic utopia. The ship doesn’t actually show up for the first half of the film, but there are a couple of flashbacks to Harlock’s distant ancestors around World War II that fly airplanes also named Arcadia. There’s a lot of talk throughout the film about honor and continually fighting for your goals. It espouses a very samurai way of thinking. Harlock keeps fighting not because he is certain of victory, but because giving up would simply be wrong. It’s all tied up in that concept of Arcadia, and the film puts a lot of weight on the noble machismo that makes Harlock such a badass.

The film relies upon that coolness factor to carry it all the way. It can often drift into melodrama and implausibility. In fact, it can seem outright silly if you’re not willing to take it at face value. If you want something a little more realistic, then Arcadia probably won’t work well for you. But if that’s the case, then anime in general probably won’t work for you. This film is best watched for the sheer joy of watching an unflinching hero take on any odds without backing down.

The pacing is as implacable and steady as Harlock himself. It never rushes to get things done, but neither does it drag along. As an action movie it can feel kinda slow, since it never builds up a frantic sense of urgency. Instead, it savors every section of the story, and this is an odd change from other anime films that try to squeeze as much content into the runtime as possible, coming across rushed and jerky in the process. Much of Arcadia’s deliberate pacing is due to its length of over two hours. Most anime films wind down after an hour and a half. Here we get the time to really let things play out properly. It’s not edge-of-your-seat excitement, but I found it to be a refreshing change from the incomplete feeling that I get all too often. 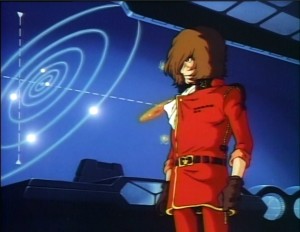 Identifying the aliens can be a bit confusing. Mainly because they look exactly like humans. Early in the film, Earth is conquered by aliens, but it was pretty confusing to figure out just who they were. There are two races that have a significant impact on the plot, and only one of them has any discernible features to tell them apart, and even that is just a slightly green tint to their skin and excessively large sideburns. The best way to tell them apart is by uniforms, but even that doesn’t always work in the later parts of the film. By that point, humans are working for the aliens and wearing similar uniforms.

Animation wise, you’ll need to brace yourself for the low end of the spectrum. This isn’t any surprise for the time period, but I was hoping it would at least carry on some of the quality that Adieu Galaxy Express 999 had. Sadly we’re stuck with much worse. Even though I do love old animation, I still have to admit that the action sequences lose some potency here.

Arcadia of My Youth isn’t much as an action-packed thrill ride, but it holds up if you’re in the mood for a film full of manly awesomeness. If you’re a fan of the good captain, or of Leiji Matsumoto’s works in general, then this is obviously a must see, and if you’re curious about the character, this is the perfect place to start.

One thought on “Stephen reviews: Arcadia of My Youth (1982)”