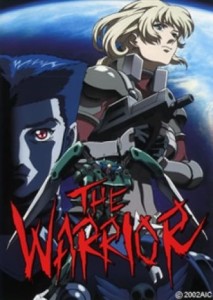 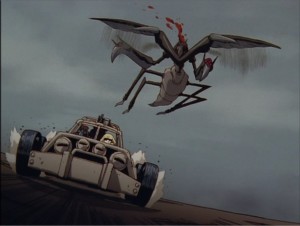 It does have its share of generic bits, including a rather predictable “alien sneaking onto the ship” scene, but for the most part, I liked the direction the story takes. It starts off with the typical average guy who doesn’t know what’s going on getting attacked by giant monsters and rescued by a giant robot. This guy just woke up from a cryogenic freezer, but that’s not a huge twist on the idea. I expected him to quickly join the army and miraculously become the only person who can pilot the really awesome robot that is the only way to kill the monsters. That didn’t happen. The first half of the film is just a quest to get to the spaceport and to escape the monster infestation.

The core of the plot development is centered on the different philosophies of the main characters. Yuji comes from our time, and he is horrified at the callous way that his rescuer Marlene treats the other people. He thinks they should be helping save the others, but Marlene is more pragmatic. Even saving themselves will be nearly impossible, and she has no time to waste on the random survivors on the surface. 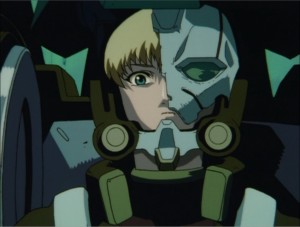 That first part of the story was my favorite, but it still had a few odd issues. The beginning of the film has scads of bug monsters running around everywhere, slowly whittling away at the soldiers and their equipment, but once Yuji and Marlene are down to grabbing abandoned trucks and trekking across the wilderness on foot, suddenly the monsters are gone. Why, aside from the fact that the plot requires it, did the monsters go away? It seems a bit too convenient, especially since more giant monsters show up again as soon as they get new robots to fight with. And when they do fight one without their robots, and a hand pistol proves to be as effective as a giant robot with a sniper rifle, which begs the question of why they were using giant robots in the first place.

The second arc of the film is where things start feeling way too rushed and unexplained. It’s rather odd, too, that the film is only an hour and a half. Since this is just reusing animation from the series, I would have expected more content. It’s not like they didn’t have any material to work with, and the story could have used a good bit more time to help with explanations and pacing. 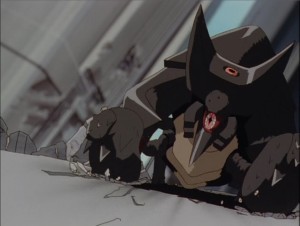 This second part of the film deals with the human counterattack on the monsters and trying to retake the Earth. But it flies by, and gives you little sense of what’s happening and why. To some extent this is forgivable, as the story is not so much focused on the war as it is with the relationship between Yuji and Marlene. But that doesn’t solve the whole problem. We still want to know just how everything happens. The ending is the biggest example of this, and really feels like the writers got stuck and just magicked their way out of the situation in order to end the film.

Blue Gender: The Warrior has a lot of issues that hold it back, but there are some good elements. I can’t give it much of a recommendation, but if you’re a mecha action fan it does offer some cool robots and plenty of vicious fights with an unusual focus on a more down-to-earth style of warfare.