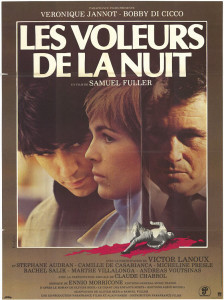 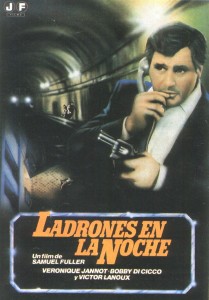 Thieves After Dark is about Isabel and François, an out-of-work young couple in love. They meet in the unemployment office, bonding over their frustration at the corrupt, slow-moving bureaucracy. Their romance is quick and furious, so intense that even when Isabel is offered a good job she turns it down to be with François. This is one of many bad decisions made by the pair, who live their lives based on giving into whatever strong emotions they’re feeling at the time. They move without any shred of logic, digging themselves a bigger and bigger hole in their attempt to “remedy” their job crisis. It doesn’t make a whole lot of sense, but most youthful decisions don’t. This kind of lackadaisical attitude towards life isn’t all that interesting to me, so the film fell flat more often than not. Fuller ultimately wraps the film up quite strongly, but it’s too little too late, the damage has already been done.

Strangely for Sam Fuller (especially coming directly after White Dog), Thieves After Dark is not a very cinematic film. There are definitely some nice moments, but if you told me this was a TV movie I wouldn’t be surprised. But it’s not a TV movie, it’s just horribly underwhelming. The opening is especially good, though, with the credits playing over a completely out-of-focus shot that slowly comes into focus as the credits near completion, leading directly into our main character sneaking backstage while an orchestra performs. There’s also quite a few great mirror shots, but outside of looking good, I don’t think they add a lot to the film.

I hate to say it, but the most notable aspects of the film are the cameos. Sam Fuller has an unforgettable cameo as an eye-patch-wearin’ son-of-a-bitch, and French director Claude Chabrol plays a corrupt official with a manic smile who spends his nights as a voyeur. I can’t say that I recommend watching the film for the cameos, but they’ll definitely provide some entertainment for film fans, especially those hardened enough to dig this deep in the film bin. Maybe it’s just one of those movies that doesn’t click with me, but I’m willing to bet that Thieves After Dark is a pretty lackluster film no matter who you are. It’s a general rule that a foreign director coming to Hollywood won’t make a film as good as those made in their native country, and Fuller proves that it also goes the other way around. There’s very little discernible Fuller style to the film, and frankly, I was bored through most of it.

No trailer, but here’s a bit of Ennio Morricone’s score for the film.