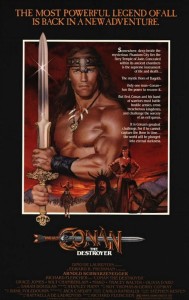 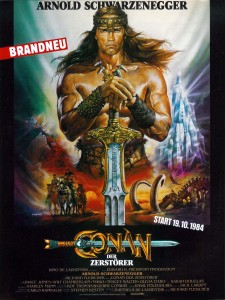 One of the biggest changes is the difference in the party that traipses around with Conan. Gone are Subotai and Valeria (obviously), and to replace them we have the bumbling thief Malik, the returning wizard Akiro (Mako), a screaming warrior woman named Zula (Grace Jones), a princess essential to the completion of the mission and her guard Bombaata (Wilt Chamberlain). Much has been said about how these party members ruin the film and don’t come close to being as awesome as the originals. There was a time when I’d even have agreed with that. But to complain about these guys is to look at them only in comparison and not judge them on their own. Each party member adds something to the journey, and I especially loved Zula and her no-nonsense approach. It is true that having so many people around Conan takes the focus away from him, but if you know that going in, it doesn’t matter as much as it could.

This take on Conan also goes hard into FX territory. We’ve got resurrected gods, wizards, phantom birds, all kinds of stuff. A lot of the FX work looks like FX and are rarely convincing, but they remain fun throughout as long as you’re into ’80s FX work and you’re engaged with the movie already. I really enjoyed how the first film focused on production design instead of FX, and while I missed that here, my inner child rather enjoyed the dumb FX. Yes, even that cartoonish moment when the wizard monster swings Conan by his feet. I should also note that this film does feature a lot of great set design, it’s just that it’s nowhere near as well-done or visually exciting as the original film. 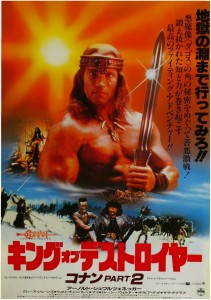 One thing that I still didn’t like this time around was the cinematography. So much of the film is shot with ugly soft focus and it dates the film horribly. So imagine my surprise to see that it was shot by the legendary Jack Cardiff! No shit, the man who shot such classics as The Red Shoes and The African Queen shot the Conan sequel (and Rambo II!). My mind is suitably boggled. In any case, my affection for Cardiff’s groundbreaking, classic cinematography doesn’t change the fact that Conan the Destroyer is kind of an ugly movie. It definitely has its moments of beauty, but even with Cardiff’s help it rarely equals even the lesser shots from the original.

I’m inclined to lay the blame for this at the feet of the new director Richard Fleischer, but he also made one of my favorite films, the Charles Bronson classic Mr. Majestyk, so maybe it was the producer’s fault. In any case, it’s someone’s fault, and by Crom they will pay!!! And by pay, I mean they will forever hang their heads in shame knowing that an Internet yahoo has called them on their bullshit. Unless I happen upon a cave while being chased by a pack of wolves, and I find a gleaming, ancient sword in said cave. If that happens, look out!

Edward Summer was the first producer who tried to get a Conan film on-screen. He had envisioned Conan as a recurring character in a new film every couple of years like James Bond. I always thought that would’ve been a great idea, especially given the broad nature of fantasy and how much of the genre is virginal territory in the film world (especially in the ’80s). This wasn’t to be, but Conan the Destroyer offers a great look at what might have been with an unrelated series of Conan films. I think if they had continued to make a few more of these with Arnold, the general hatred for this one would be tempered a bit, as people would’ve eventually come around and understood what they were trying to do with the series. But Arnold didn’t make the third movie, Conan the Conqueror, because he was already signed onto Predator and his contract with Dino De Laurentiis had expired. So would I have wanted more Conan and no Predator? No, I think I like it how it was. They eventually turned that Conan the Conqueror script into Kull the Conqueror, so I guess I should watch that one to see where it might have taken Arnold.

Conan the Destroyer is goofy at times and it isn’t anywhere near as macho and awesome as Conan the Barbarian, but it’s a good load of B-Movie fun. So if you remember hating this one, go into a re-watch with an open mind set to fun and you’ll have a good time. Like when Conan and his adventuring party venture into the desert and find a temple hewn into the side of a mountain, a world of fantasy awaiting them underneath the white, sun-bleached rocks, Conan the Destroyer is a rollicking and imaginative film that’s been buried beneath nearly 30 years of bad press.