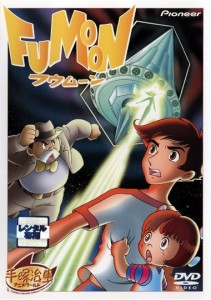 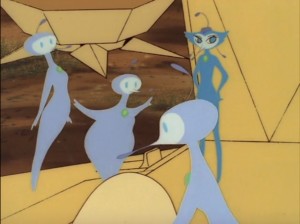 I have one other major gripe about the film, and that’s the ending. It felt far too contrived. The day is saved simply because the plot required it to happen. Sure, the prior two films had their share of random events that came out of nowhere, but this felt different. It’s one thing to have a new villain pop up and complicate things, or shift the tone and genre around without a moment’s pause when those events tie into the themes and style of the work as a whole. But it’s another thing entirely to just force a happy ending without any relation to cause and effect. It discounts all the effort of the main characters and comes across as if the characters didn’t earn their victory. As bizarre as Bander Book‘s and Marine Express‘s endings were, at least the characters had to succeed. But Fumoon‘s ending on a platter robs it of its emotional resonance, which is a shame since it could have easily avoided doing so.

So now that I’ve finished my griping, what is this movie actually about? It’s a pretty straightforward allegory of the Cold War, but also ties it into environmentalism as nations exhaust the world’s resources in an attempt to outgun each other in the name of self defense. On one island, a once lush tropical paradise turned into a toxic wasteland from constant warfare, a biologist stumbles upon a new creature that has never been seen before. The biologist does what any good movie scientist would do in this situation: he knocks the creature unconscious and takes it back home for further study. 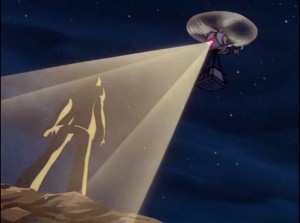 Upon examination, he concludes that the creature is a new human that has evolved in the desolate wilderness. He calls in his good buddy Ban Shunsaku to help investigate. (There are fewer recurring characters here than in Bander Book or Marine Express, but there are still a good deal of them.) But soon Ban and the new human get sucked up into a flying saucer type craft. Zounds! It seems these new humans have fantastic super-technology. They have telepathy and anti-gravity devices and shrinking machines. And they’re probably not very happy about us blowing up their island.

I wish the film took this concept a bit further. I was expecting it to parallel the conflict between new and old humans to the arms race already going on between the other nations in the film. But as with all these Tezuka films, it threw me a curveball and complicated the situation with a completely new problem. A nearby star went nova, and it shot a huge black cloud towards Earth that can’t be any good for anybody. The new humans are trying to figure out what to do about it while the rest of the world continues its wars. Only now the new humans have been discovered, so everything gets tangled into a web of conflicts. 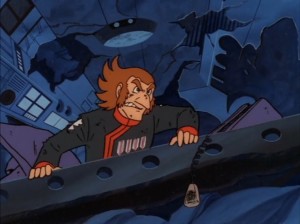 This is all well and good as a story. It sets up a cascade of events that shift the balance of power. Plans fall apart and need replacing. In short, it’s everything you could want for a gripping adventure. There’s tons of great content here; I just wish it didn’t have the sappy overtones or the forced ending. But looking at children’s films, this kind of heavy-handed message isn’t out of the norm, and I’m probably being overly critical. Though the previous films had a much larger impact on me, Fumoon is still a fun movie that has its fair share of entertainment value, and if you aren’t as concerned about obvious moral messages, then you could well end up with a much different opinion from mine.

As before US and Canada residents can look for this in the 24 Hour TV Specials section on Anime Sols.