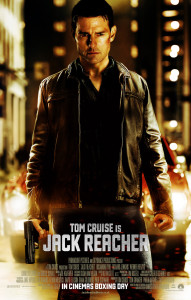 The film begins by showing us the crime at the heart of the tale. A sniper sets up in a parking garage and carefully sights his targets across the river in a city park. It’s a lengthy, tense, realistic bit of film that quickly gets you in the mood for a mystery thriller. The whole thing plays out with minimalist sound design and no dialogue, resulting in pure, visual filmmaking. Director Christopher McQuarrie has definitely come a long way since his previous film (which was also his directorial debut), Way of the Gun.

There are a few flaws that I think hold Jack Reacher back from reaching its true potential, though.  That sometimes preposterous plot will definitely roadblock some people, but I’ve already summarily dismissed that in the name of fun. The dialogue also feels a little too sharp and snappy, especially towards the beginning. This makes the characters feel like characters oftentimes, and that doesn’t do much to pull you into the movie and make you believe.

My other major concern is that the Jack Reacher character is relatively hard to like. He’s seemingly from the same mold that delivered us many hard-edged, revenge-driven ’70s & ’80s action stars, the kinds of guys that only give a shit about completing their mission or protecting whatever’s in their best interest. While this works in those movies with no questions asked, in a modern film that tries to dole out as much drama as it does murder, the character feels a little out of place. Reacher does a lot of damage to both property and life during the course of the movie, and yet he’s held responsible for none of it. The story revolves around the investigation of an ex-military sniper who killed because he never got to “scratch his itch” in Iraq, yet Reacher is an ex-military man who kills mercilessly throughout the film and no one seems to mind much.

In this way, the film almost feels like wish fulfillment for service members that wish they could take the law into their own hands. This is hammered home even more when rousing, heroic, superhero-esque music plays as Reacher’s theme. He’s not just on the case, he’s a hero out for justice! Which sounds like an ’80s tagline for a macho action flick, and that makes me realize something. With his back story and his current status as a drifter and a badass, Reacher is basically Rambo, and I never had any issue with watching Rambo have his way with hordes of enemies, so perhaps I should just lighten up. It is fun to watch Reacher do his thing, but within this modern context the reckless machismo just felt a bit much. But whatever, I can’t argue that Jack Reacher in Court would make for a better movie.

The film is also longer than it needs to be — or at least it felt that way — but I can’t deny that through these issues, Jack Reacher is still an entertaining, enjoyable experience. It’s not for everyone, and it’s definitely not that non-stop action movie that the trailer promised, but it does contain a pretty solid mix of fun thrills that rarely let up. It is also a fine mystery, something I haven’t seen in a while from a mainstream Hollywood film. I don’t think this one did well enough for a sequel, but I’d love to see what they could whip up.