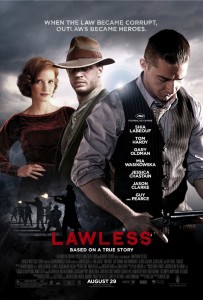 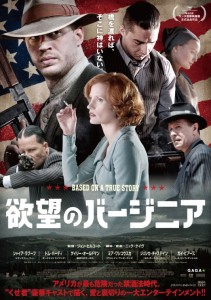 The elements of a good movie are definitely here, but Lawless is so unfocused and boring that the most pressing thing on your mind while watching will be how much sleep you need to catch up on from the previous night. I can understand hiring Gary Oldman if you can get him in your movie, but in a role so small it doesn’t make a lot of sense. Especially when he makes his first appearance at the opening of the film, in something of a glorified shot that suggests he will be a central character. While he does contribute to the brothers’ business expansion, the character could have been completely removed and no one would have noticed. What’s strange about this is that Oldman’s scenes were my favorites of the film, so I guess I can understand the filmmaker’s inability to cut them.

While I was working through my boredom, I tried to figure out who this movie was aimed at. The only thing I could come up with is someone who might sympathize or relate in some way to Shia LaBeouf’s character, whoever that is. The film doesn’t really have a main character for most of the film, but Shia eventually emerges from the dust as our lead. Even then, he’s far from interesting and he’s a dick so it’s hard to care about him. Perhaps the only really intriguing idea on-screen is the legend of the three brothers among the townspeople. They believe them to be invincible, thanks mostly to Tom Hardy’s ability to come back from literally any wound. I have to wonder if this is where the creative license of “Based on a True Story” comes in, because some of this shit is really over the top. But whatever, even if they were unbelievable, these extreme moments were far and away the most engaging thing about Lawless.

This review was supposed to go up last week, but when it came time to edit it I just couldn’t bring myself to read or think about this movie. I purposefully put it off a week. Lawless carries a lot of promise in its cast and its premise, but it is wildly underwhelming. I know there’s potential for a good, modern prohibition movie, but this definitely isn’t it. I guess I’ll just have to stick with The Public Enemy.