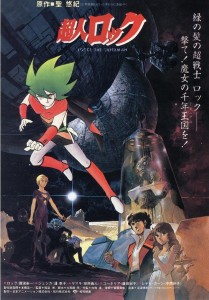 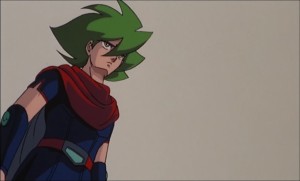 Now that we’ve sorted that out, Locke, unlike the Man of Steel, is an esper with psychic powers. They pretty much give him the same end result, though. He doesn’t fly, but he can teleport. He’s not indestructible, but he can create a force field that keeps him pretty safe. He doesn’t have super strength, but he has telekinesis that lets him knock down doors and hurl things around. He doesn’t have X-ray vision to see through your head, but his telepathy does let him see inside your head. He’s also got healing powers and some sort of sixth sense that lets him know where stuff is and lets him see through illusions. He seems to hold his own on the martial arts front, too. So, yeah, the guy kicks some ass.

He’s also a farmer. Or at least a shepherd. Close enough. He spends his days raising sheep and staying out of galactic politics. So when Colonel Ryu Yamaki shows up with a job offer for whatever the galactic government happens to be called, he rejects it at first. But Ryu likes sheep too, so he must be a good guy, and Locke eventually gives in. You see, there’s a crazy evil chick named Lady Kahn making an army of espers to take over the galaxy. They have floating aerobics classes, so they must be evil. Not convinced yet? Well, Kahn also sets up an esper assassin to seduce Ryu and kill Locke. 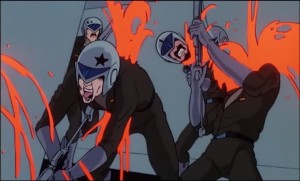 The plot moves along fairly well and sets up a decent conflict, but there’s just something lacking. It’s not the animation, though this has all the typical low-quality production of most early ’80s anime. It looks as decent as you could expect from the era, though, and the action is solid enough to entertain. It did surprise me with an early foray into CG, but it was far less pathetic than Golgo 13. I was less impressed by the live fire shot superimposed over the animation. Who Framed Roger Rabbit not withstanding, mixing media like that doesn’t tend to work. There were some good points to the animation, though. Several scenes of the camera traversing hallways looked very good, especially the one where soldiers were getting mercilessly shot up along the way, even with their strange, neon-colored blood. Nobody else had neon blood. What was wrong with these guys?

The film’s problem is more of an emotional disconnect, mostly with Locke himself. He is portrayed as a neutral character that doesn’t pick sides, so it doesn’t make much sense that he joins the humans, especially since he is an esper himself. It clearly sets up discrimination against the espers that seemed very reminiscent of Toward the Terra. The esper’s struggle for rights could easily be seen as noble. Why does Locke side against them then? I know Ryu likes sheep so he must be a good guy, but that’s not a very compelling reason. 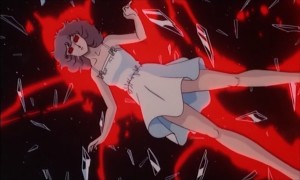 Locke’s motives are never explored, and his morality is rather inconsistent. Despite killing a few people earlier in the film, at the end he makes a point of not killing. There it feels a bit like Superman vs. the Elite. But while it reminded me of those two films, it mostly reminded me of how much better they were. Where those films used the situations and themes to inform the emotional development of their characters, those same themes fall into the background in Locke the Superman. The film thinks that just mentioning deeper meaning makes it happen, but only gives us meaningless fluff.

It isn’t until the end of the film that Locke expresses any kind of opinion. He’s unhappy with the chosen punishment of one of the villains, but even that potential depth quickly vanishes. What does he do with this righteous indignation? He brings flowers to the woman’s hospital room. Wow, way to save the day, Locke. The one time he genuinely expresses a moral value of some kind, he doesn’t bother acting on it. 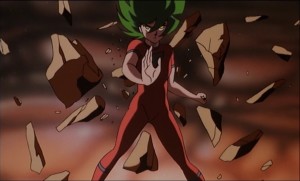 That kind of sums up the nature of the movie. It layers on some themes with potential, and then does nothing with those themes. As a result, the film comes across as bland. It’s not a terrible film by any means. I wouldn’t even call it a bad film. There is enough adventure to keep it going, but that lack of connection to the main character really holds the film back. The action is fun, but not fun enough to elevate the film beyond simply average fare.

Go ahead and watch it if you get the chance, but only diehard ’80s anime fans should bother putting much effort into tracking it down. Locke may be the Superman, but he’s not the Man of Steel.