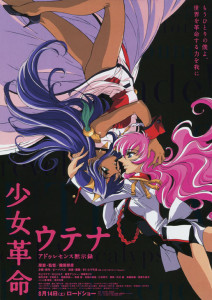 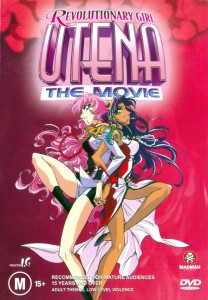 So why do I love this movie so much then? Well first off, I love weird shit. Secondly, this film is beautiful. Lastly, this film has an incredible depth of character and meaning. Yes it’s weird, but all of that weirdness is in the form of metaphor, allusion, and illusion. Utena is the ultimate arthouse anime. It is layered and complex. It took me several watchings to understand much of anything. But if you care to look there’s a lot to find. Everything is there for a reason, just not an obvious one.

I should warn you before we get any further along that Utena is a lesbian romance, so if the idea makes you squeamish, you better leave the film alone. It’s about a tomboy named Utena. She’s the new girl in school, and while navigating the strange and beautiful architecture, she meets another girl named Anthy. Utena then discovers that Anthy is the Rose Bride, a prize for whoever is the current winner of an underground dueling club. Outraged at Anthy’s de facto slavery, Utena wins a duel and becomes engaged to Anthy. She must then protect Anthy from the other duelists who want to use her for their own desires while dealing with her own conflicting emotions at being engaged to another girl.

Despite the duels, action is not the film’s main focus. There are several action sequences — all of them beautiful — but they’re just the backdrop to the real story, which is not only about gay rights or gender equality. Those are just the surface themes. The deeper themes are about growing up and leaving the past behind. And even more so about illusion and confronting tragedy. 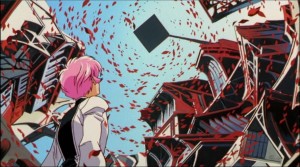 This depth is reflected in the characters’ relationships, and especially Utena’s. Despite the sparks flying between her and Anthy, she is not a simple lesbian. Nothing in this film is plain and one-dimensional. Utena still deeply loves her ex-boyfriend Touga, and that failed relationship haunts her through the film, especially since Touga is a participant in the duels. The final confrontation between Utena and Touga is every bit as beautiful (there’s that word again!) and heartfelt as any of Utena’s scenes with Anthy.

I keep using that word “beautiful” for a reason. This film is absolutely gorgeous. (And so is the soundtrack, a subject that I wish I had more time to delve into.) The animation may not have quite the technical quality of a Ghibli film, but it is still damn good. But I’m not even talking about the animation. I’m talking about the style, the imagery, and the directing. Other films might have better animation, but none of them (Ghibli films included) are as beautiful. Every frame of this film is like a work of art. It is so fantastic, that even if the movie didn’t have all that depth, I would have still loved it for its beauty alone. 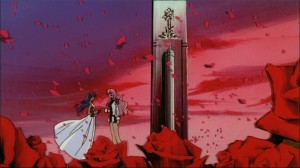 Nothing in the film is more beautiful than the dance scene in the flooded rose garden. I have little experience with romance scenes, but this is easily the most romantic moment in any story I’ve ever seen. It’s enough to fill even my jaded heart with awe. Roses float by at random with the starry night sky reflected in the water. Utena and Anthy wear their normal school uniforms, but their reflections in the water wear their fancier dueling costumes.

As the scene continues, the camera flips upside-down. It focuses on their reflections which now look right-side-up. The camera pans down, err up rather, into the sky where the castle of eternity hangs in the air, upside-down, and therefore looks right-side-up. It’s a scene so odd and confusing that it took several re-watches before I figured out what was actually happening. But it’s so mesmerizing that I could never pull my eyes away from it. And the CG roses floating about only adds to the beauty. 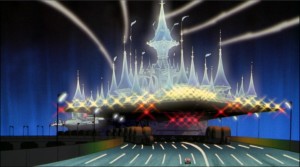 Wait, what!? Did I really just say that? Ahh man, I did. The CG in here is amazing. No matter how much it hurts to say it, it’s true. I have never seen CG this good in any other anime. It’s so seamless that unless the director’s commentary track hadn’t mentioned it, I might have never noticed those roses. There are places in the film where it is more obvious, but those scenes are still not only good-looking, but intentional, placed there precisely because Ikuhara wanted to have a CG look to the scenes.

Even better than the roses, though, is the odd conveyor-belt trap at the end of the film. It looks nothing like CG. Except that it never could have looked that good if it hadn’t been CG. Even knowing it was CG when I watched it, I still questioned my memories. I had to check that director’s commentary again to make sure. That’s how good it is. 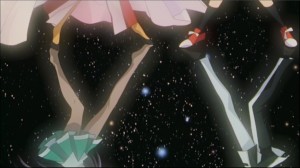 All that begs the question: just why the hell does a film made in 1999 have the best CG ever used in anime? Not even films made 10 years later like King of Thorn or First Squad come anywhere near the quality of this film’s CG. Shouldn’t technology be advancing rather than degrading? If all anime used CG as good as this I wouldn’t have to gripe about it in every review. I just don’t know why Utena is the only one to do it right.

So if I can’t complain about the CG, then what can I complain about? There are some strange decisions made for the story, not the least of which is that bizarre car wash scene which completely abandons the dueling premise for the remainder of the film, replacing it with an enormous car chase. But in a film so involved with metaphor, there is no point to the literal events anyway. Changing focus in such an incomprehensible way forces a more symbolic interpretation, which is the entire point of the film.

It’s all very head-scratching, but Ikuhara wasn’t just pulling stuff out of his ass. He clearly had a vision, and he just as clearly created exactly the film he wanted. Even after a dozen times watching Utena, I’m not sure I really understand everything, but the things I have figured out have left me astonished. This film will only appeal to a select few willing and able to see past the confusion, but even if you can only see it as random nonsense, its brilliant craftsmanship and narrative force still make this a mesmerizing experience.