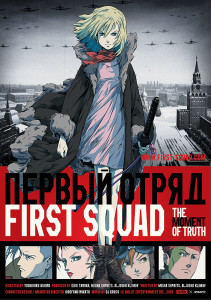 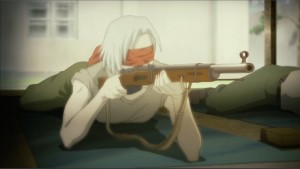 But aside from broadening my cinematic horizons, First Squad also has something we in the business tend to refer to as a “story,” and I should probably talk a bit about that. The story focuses on a psychic girl named Nadya. She’s gone through some training in the Russian military to use her psychic powers. It was pretty much like any other military boot camp, except she and her cohorts went through it all blindfolded. The staff fighting was pretty cool, and marksmanship must have been tons of fun.

Sadly, her buddies from boot camp all got killed by the Germans, leaving her the only psychic soldier the Russians have left. When the Germans decide to raise an army of undead medieval knights that only people with psychic powers can kill, Nadya alone isn’t going to be enough to save the day. So the Russians decide to fight fire with fire by resurrecting Nadya’s old pals for some payback. 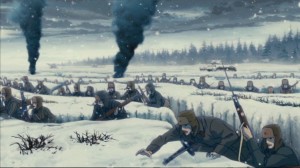 It’s a story that would have felt right at home in a Hellboy comic with its Nazi occult powers and tons of zombies running around. The action is a lot of fun, and very cool. From the Nazi twins beating up an old man to the bizarre diver suit contraption Nadya uses to travel to the afterlife, just about everything in this film is pure awesome.

Unfortunately, it’s all a bit too short. The film runs about an hour long, and too many scenes felt rushed. This is especially true for those German twins that keep chasing Nadya around. The scenes always end with Nadya escaping, and they never have a good confrontation to clear up their unfinished business. That awesome blindfolded training montage felt too short as well, and I wouldn’t have minded a bit more action for the final showdown either. I feel like another half hour or so could have done this film wonders. But it’s hard to complain much when the stuff they did squeeze in is all very good. 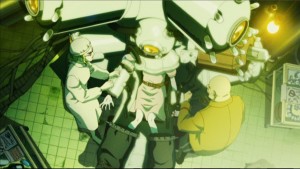 I can’t complain much about the animation either. I do have to go on my usual tirade about CG being the source of all evil, but I am the one who knowingly decided to watch an anime from 2009. CG is just part of the deal these days. Like it or not (and I definitely do not), I just have to shut up and deal. They did a fairly decent job with it, anyway. The CG is reserved mainly for vehicles: planes, trains, and automobiles (and tanks). This is probably the least obnoxious use of CG you can put in an anime, and the texturing they used to blend it into the background art worked pretty well.

The one thing I really can complain about is the ending. I spent the whole film waiting for Nadya to really cut loose and show what she can do. But right at the height of the action, and for no real reason at all, they decided to turn her into the damsel in distress that needs her boyfriend to rescue her. In retrospect, she gets very little action time across the whole movie. I can forgive this a bit since it obviously needed to be longer than it was, but I can’t forgive having such a badass female lead only to wuss out with a stereotypically chauvinistic ending. It was a lame way to end the film. 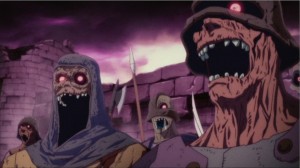 I can bring up some other minor quibbles, but they aren’t very noteworthy. It’s odd that Nadya’s undead buddies look normal when all the other zombies are rotting and blood-soaked. I also wondered just how cold Nadya must have been wearing that short skirt in the middle of winter. Russian winter. But none of that was important enough for me to care about.

So while I do have a few problems with First Squad, they don’t quite outweigh the good. It’s still a fun movie if you like supernatural action films, even if it does have a disappointing ending.