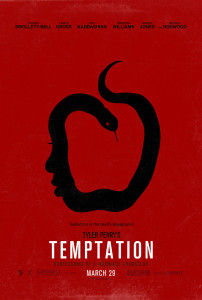 There are those that liken the release of a new Tyler Perry film to the coming of a multitude of locusts, and so my interest was always somewhat piqued to delve into his films. I always figured that they couldn’t possibly be so bad as everyone made them out to be; that it had to be hyperbole. So after watching Temptation, the first Tyler Perry movie I’ve seen, I can definitively say that the naysayers are indeed bringing down wave upon wave of hyperbole onto Perry and his creations. One look at the Rotten Tomatoes page for this film says it all: the critic score is 18%, while 74% of users liked it. Judging on Temptation alone, Tyler Perry is clearly not making artistic, cinematic gems to dazzle the critics, he’s making populist entertainment for the masses that are looking for a good melodramatic fix. And boy, let me tell you, this one is full of melodrama.

Judith (Jurnee Smollett-Bell) is a therapist working at a millionaire matchmaking service, run by Vanessa Williams doing a bad French accent. I should note that while the accent is bad and somewhat grating throughout, it does lead to a fantastic moment of heightened melodrama late in the film that I just loved. Anyway, Judith is tasked with working with an Internet millionaire named Harley (Robbie Jones), helping him to develop a matchmaking website for the Williams’s service. He begins to seduce her, and as Judith is married to a great, but detached guy names Brice (Lance Gross), she responds. The setup is pretty simple, for sure, but as a melodrama it’s not so much about giving you unique, specific plot points as it is about giving you fun, heightened derivatives of formula and pulling out your raw emotional responses. 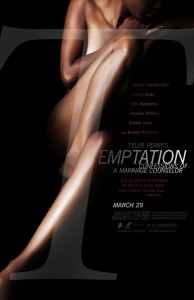 Temptation does this really well, working its way pretty seamlessly through multiple tones. Over the course of the movie I was anywhere between laughing, tears, frustration, satisfaction, cheering or jeering. The metropolitan setting and the tonal shifts that balanced drama with splashes of comedy reminded me of Woody Allen, and it was at that moment in the theater when I realized that Tyler Perry is very similar to Allen in the broad sense. They both crank out their artistic projects without fail, ignoring the critical response, whatever it is. Perry’s filmmaking isn’t nearly perfect or cinematic enough to be compared to Allen’s, but in terms of consistently producing content and riding that line between serious and comedic, I think they’re very similar.

And speaking of Perry’s filmmaking sensibilities, I am at a crossroads. I can choose to go hard into what I didn’t like, but because none of it bothered me because I was so engaged with the characters, I’m going to choose the alternate path. Perry is definitely not much of an artistic filmmaker, and a lot of the film feels something more akin to a play (as his background in the theater would suggest), but there’s more than a few really great, cinematic moments sprinkled throughout the film. One involves a handheld tracking shot of Judith arriving home to her apartment and walking all the way to the kitchen to find her husband. Not only is it nice to look at, it expertly reflects the driven nature of Judith in the scene. Another nice moment involves an incredible shattering of glass, but to say any more would be to say too much. But I will say that when that glass shattered, I’m pretty sure I let out an audible, primal grunt of triumph. 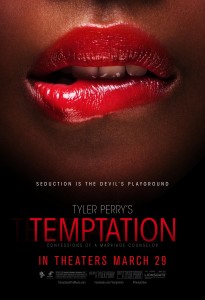 There are definitely elements to the story that could be called heavy-handed, over-the-top, or preachy, but never once during the film did I think of any of these phrases. It was only later when I was thinking back on the film did some moments stand out as such, but what’s a melodrama without some over-the-top elements? If you wanted to, you could extrapolate out of some of these plot points that Perry is telling women their place, or that certain people deserve the horrible lot they’re given. But I think that would be missing the larger point that this isn’t meant as social criticism, it’s something of a biblical parable. There’s a moral lesson to be learned here, and whether you’re Christian or not, it’s still good advice.

Before I close out, I should probably address Kim Kardashian’s inclusion in the cast. Let’s cut to the chase: her introduction scene was pretty bad. Her delivery was kind of wooden, and it seemed like even she knew that she wasn’t cut out for this line of work. As the film went on, I liked her small scenes more and more, and her acting seemed a lot better in these shorter bursts. But in any case, she’s only in a few scenes and she does not kill the movie or any other such hyperbolic barb. I think the most damning thing about her performance is that thanks to my girlfriend I’ve seen more than my fair share of Keeping Up With The Kardashians (secrets!), and I know she can do a lot better than what she does here.

The real stars of the film, though, Jurnee Smollett-Bell, Lance Gross & Robbie Jones, are all excellent. They handle whatever material Perry throws at them with ease, inhabiting the characters and letting the audience in on their lives. They could all be huge movie stars if Hollywood would ever cast a largely unknown black actor in a major motion picture. I don’t want to get into my feelings about the poor casting in mainstream films again, but seriously, give these people some work!

As much as I enjoyed Temptation, it would benefit from some tightening and a dash or two more of cinematic-ness. Honestly, though, these were minor concerns for me as I was having much too much fun riding the melodramatic waves that Temptation took me through. There’s definitely been better melodramas over the years, but Perry strikes a good balance between drama and comedy that hit me just right today.