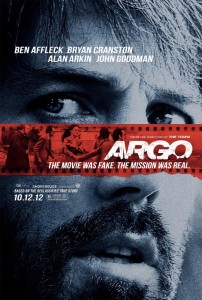 A lot has been said about Affleck getting snubbed by the Academy for Best Director, and Argo‘s Best Picture win definitely adds fuel to the fire. But I can see why he wouldn’t get nominated based on the quality of the filmmaking here. It’s definitely better than The Town was, but Argo is only slightly better made than a standard mainstream film, and it rarely feels like a cohesive work. The Hollywood scenes feel separate and distant from the harsh realism of the streets of Tehran. I’m sure that’s on purpose, but it feels like two different movies. Also, Ben Affleck’s camera never veers too far away from incessant close-ups; honestly, you could more easily count the shots that aren’t facial close-ups. His use of licensed songs also feels inappropriate and completely removed from any contextual meaning within the scenes. I mean, I like Led Zeppelin’s When the Levee Breaks too, but other than reminding us that this is the past, its placement in the film is worthless. Affleck made a good movie, for sure, but at least in my eyes this is quite far removed from award-winning filmmaking.

I also had a hard time feeling too sorry for the Americans stuck at the Canadian embassy. I know it’s not their fault, and that they were in a legitimately dangerous situation, but I kept thinking about the other people who were actually kidnapped that the film kind of glossed over. More distressing is the fact that the events that inspire Argo were caused by America’s direct involvement in staging the coup that overthrew Iran’s democratically elected leader, in order to install a Western-friendly, authoritarian leader. On top of all that, to make Argo and to fictionalize its events in this entertainment-minded manner during a time when US relations with Iran are anything but stable just seems a little too “AMERICA, FUCK YEAH!” for my tastes. I’m surprised at the nearly universal critical acclaim thrown at Argo; isn’t it the jobs of film critics to call bullshit on stuff that takes license with fact in such grand ways?

So while the film rolled on and I ruminated on these problems I had with Argo, along came the actual escape scene that the film builds towards. It’s great. It’s not really anything you haven’t seen before or couldn’t have figured out yourself, and it treats the Iranian guards as simple-minded stooges impressed more with the promise of cinematic “pew pews” than actually doing their jobs, but it’s quite entertaining. The escape was embellished to levels of pure fantasy in the film, but I was enjoying myself too much to argue with it. I had many issues with Argo, but I can’t deny its ability to entertain. This will most assuredly not be one of those Best Pictures that stands the test of time, though.