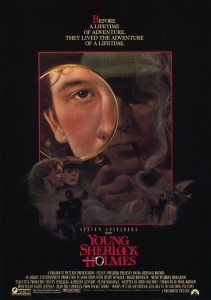 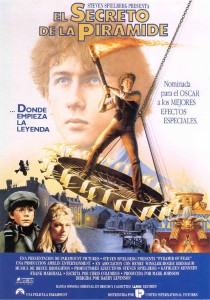 Speaking of the FX, the film is notable in this regard for two reasons. First, Young Sherlock Holmes is the first film to feature a fully CG character (the stained glass knight), and that effect was created by John Lasseter, who would later go on to start Pixar. Secondly, and this is more on a personal note, the stop-motion in the pastry sequence was done by none other than Dave Allen, the same guy responsible for the stop-motion in all the early Full Moon films! Beyond those fun facts, the FX work in this film is superb and incredibly seamless. Even as an adult I was unable to tell how they pulled off many of the illusions, even while actively trying to see through their movie magic. As a fan of practical FX work, I find it interesting to know how it was all done, but here I’ll just have to be content with not knowing. Truly remarkable work.

I should probably note that there are few films I’ve seen more than Young Sherlock Holmes. Without hyperbole, I’ve probably seen this movie somewhere around 40-50 times. When I was growing up, we had a small rotation of favorites that got played over and over again. The films on that list will forever hold a special place in my heart, and whenever I revisit them in my adulthood it’s always quite the occasion. I’m happy to say that Young Sherlock Holmes holds up, even if it doesn’t have the hypnotic power over me that it had in my youth. Just the fact that I’ve seen it so many times and I can still look to it fondly and draw entertainment out of it should speak to the quality of the film at hand. 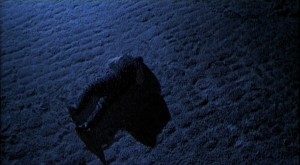 The first hour is a bit slow, though, working through its episodic plotting to introduce us to a variety of characters and sub-plots. It’s all written rather well, but having seen it so many times I did find it hard to stay interested during this section as there wasn’t a lot for me to focus on that I hadn’t already consumed and dissected thoroughly. That’s no fault of the movie, but it was my experience this time around so I feel I should relate that. Once it kicks into the mystery proper, though, the film gets really, really fun.

And when I say fun, you should definitely make note of the production year if you’ve never seen this movie. In 1985, the ideas of fun at the movies were much different from the ideas of 2013. In the carefree ’80s, it didn’t matter so much if a film had unbelievable elements; it’s a fantasy, so why not go fantastic? So just as a word of warning to those that perhaps might be persuaded into watching this based on my praise, it’s a decidedly ’80s film, even if it doesn’t give off that vibe on the surface. 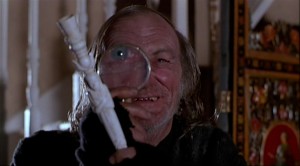 And there’s also Egyptian iconography and sub-plots! I’m a sucker for that kind of stuff. I ate it up as a kid, and it was still my favorite aspect of the film this time. I’m trying to be vague for those that haven’t seen it, but the Egyptian set is an incredibly well-crafted piece of design, from hulking heads of snarling horses, to thick pillars covered in hieroglyphs. A lot of things about it don’t make a lot of sense, but for those issues just see the paragraph right above this one. The sequences on this set (especially the first one) also showcase the film’s best pieces of editing and composition, creating thick tension for Holmes and Watson to tread through while investigating the scene ala Indiana Jones.

I can definitely see the film’s flaws as an adult, but it’s a movie made for younger audiences, so that is to be expected. Besides, I can also personally attest to the fact that it was completely awesome to the kid version of me, so that should also count for something. Purists be damned, I love Young Sherlock Holmes.

This re-watch of Young Sherlock Holmes was spurred on by my participation in the London in Genres Blogathon run by Shala over at Life Between Films. Go check it out for some great recommendations!