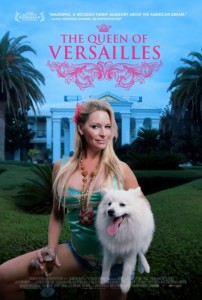 The Queen of Versailles is a film that I like in premise more than I like the actual movie. The idea of watching a movie about a rich family losing their fortunes and having to cope with the financial recession that hit a couple of years ago sounds like a crackin’ good time to lowly ole me. But in actual practice it’s a little thin for a feature, as it never feels like there’s anything being learned or gained from the experience of watching their demise. There’s definitely the morbid curiosity of watching rich people make incredible statements that show just how out of touch with reality they are, but there’s only so far that can take you.

I can only imagine what this documentary would have been without the financial crisis. It was well into production before that happened, so it ended up being one of those happy accidents. Would there really have been a whole movie chronicling this family’s construction of their $100 million dollar house that was set to be the largest in America? I can’t imagine actually watching something like that, especially when the first 30 or so minutes of The Queen of Versailles are just that. Thank God the stock market went to shit, because the movie was getting awfully stale watching our subjects host parties for the Miss America pageant contestants, or talk about how cramped their family is getting in their current, and huge, house. 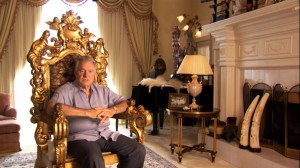 I guess I’m supposed to love that classic American dream, and watch this section of the film with admiration and longing that one day I’ll be the one building that incredible mansion. Pssh. I have never been motivated by money, so the idea of striving for such waste while so many struggle just to have one meal a day is abhorrent to me. And I think this is a big reason I couldn’t fully get into the film. There’s no one for me to latch onto and root for (except the Filipino maids, they were great), nor is there someone who I can truly hate. I’m not a fan of out-of-touch rich people, but I don’t hate them. They’re simply products of their wealth and upbringing. Even beyond this, I don’t think The Queen of Versailles is anything all that special. It’s well-made, for sure, but it feels too meandering and slow in sections, and without any real narrative drive or payoff it feels rather unfinished as the credits roll. Robbed of its intended ending of the family living happily ever after in their gigantic home, the film just feels like it cuts off and I wanted to know more.

A few years back at a local film festival, I saw one of director Lauren Greenfield’s earlier short films. It was called Kids + Money, and I remember it exploring similar themes as The Queen of Versailles does. I don’t remember any specifics, but I definitely recall feeling that voyeuristic feeling of watching out-of-touch rich kids and shaking my head at just how bold and out of touch they truly were. I have no idea of that film’s availability, but if you enjoyed The Queen of Versailles, I think it’s definitely worth tracking down as a great companion piece.

I did appreciate the inclusion of David Siegel’s boasting about helping to elect George W. Bush through means that might not be considered legal. I hope the irony of this admission and the fact that Bush’s presidency basically led us directly into the financial pit of despair is not lost on him. Who knows, maybe he’ll have a change of heart. I doubt it, but a poor boy can dream, can’t he?

The Queen of Versailles was a pretty good documentary, directed rather subtly and skillfully by Lauren Greenfield. Most other people seem to be loving it where I merely liked it, so if the premise sounds good, definitely check it out!