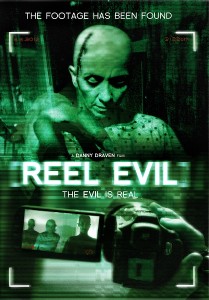 But don’t get excited unless you’re really into one of the following things: wild shaky cam, the color green, forced dramatic tension, stuff that appears on-screen for a split-second and then never returns or pays off in any meaningful way, or gratuitous nudity. Well, don’t get too excited about the gratuitous nudity either, as it’s not all that special and there are much easier ways to see titties. If you’re on Firefox, you don’t even have to type anything. Just highlight that word, right-click and hit “Search Google for ‘titties’.” It doesn’t get much easier than that.

OK, enough about searching for titties. Let’s bring it back to the movie.
Don’t make me do it!
But we have to, Will; it’s a movie review.
No, we can write about anything we want!
No one cares about anything but this movie, they’re reading a review of Reel Evil. We need to give them what they came for.
So they don’t want to hear about how the other day we overheard someone say, “My friend convinced me to go tanning for the first time and I burnt my sphincter so bad.”? [Editor’s Note: True story.] Well, now that you mention it, that is quite a bit more interesting than this movie.
I rest my case. 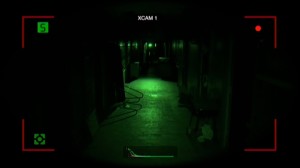 OK, where was I? Geez, I’m seriously stumped trying to come up with things to talk about; the movie dulled my senses to the point of pure indifference. I can say one positive thing about this movie: Jessica Morris. She’s one of the go-to actresses these days for Full Moon and she delivers yet another great performance. She’s the best actor here by far, and she does her best with what she’s got. I’m actually surprised she’s still doing Full Moon movies; she should have been discovered and moved onto bigger and better things by now, or at least bigger and better horror movies!

One other coherent thing I can say about this one is that it never once feels like a Full Moon movie. OK, whenever there’s nudity it feels like a Charles Band movie, but other than that it has a very different feel than anything Full Moon has ever done before. Fans of Full Moon might embrace this new aesthetic, or they might choose sanity and reject it as I did. It’s an interesting experiment, and I’m glad they officially made a found footage movie after all these years, but I had hoped it would be at least a little more satisfying than this. It does look good if nothing else, although the color palette is so limited that everything starts to run together very early into the film.

If you’re a big Full Moon fan try it for yourself, because honestly it might work if the setting was right. Don’t ask me to define what that setting might be, but in this grand, infinite and ever-expanding universe there has to be someplace where this movie fits in just perfectly.

Next week on Full Moon Tuesday, I’ll be checking out the latest Moonbeam film to hit RedBox, Timekeeper! It’s actually a 1998 film called Clockmaker, but for some reason they always retitle the Moonbeam stuff when it comes out for RedBox. Whatever.