Django Unchained is a movie ripe with things that annoyed me, but one of the most frustrating was the fact that Django is nearly always playing second or third fiddle to the other characters. While I love Christoph Waltz, and I think he does a fantastic job here, he’s given so much dialogue that Jamie Foxx can barely get a word in edgewise. It feels like Tarantino read all those glowing reviews of how Waltz’s character in Basterds was awesome and said to himself, “Yeah, he was awesome! And I wrote him! Damn, I’m great! In my next movie I’ll write him another character and I’ll make him talk more, because bigger is better, baby! Y’know?” The wealth of material written for the character is truly astonishing; the boundaries of “supporting character” are stretched to the absolute breaking point. And forget about it once Leonardo DiCaprio comes into play; it’s the Waltz/DiCaprio variety show until the finale.

Don’t get me wrong: they’re great, but this is DJANGO UNCHAINED! Unchain this motherfucker and let him rip! Isn’t this supposed to be the movie where a slave becomes a free man? Then let him be that free man who speaks for himself! King Schultz frees Django to spend most of the movie just listening to white folks jibber-jabber? I understand that Django’s character is played more for his patience, and his underlying anger, but I felt cheated that Foxx wasn’t front and center throughout. When Django speaks, he asserts himself as a strong, smart man capable of going toe-to-toe with anyone on-screen, but Tarantino barely gives him any dialogue. I understand “Those were the times, so Waltz had to do all the talking,” but this is a Tarantino fantasy for God’s sake, he can do anything he wanted to. He’s clearly proved that throughout his career! So why can’t Jamie Foxx get a dope dialogue scene too? Or two, or three? Tarantino claims to be making a movie about freeing a slave, but then seemingly robs him of that status by not writing the movie for him. It’s ludicrous. And I know that the original Django was a “speak thru his actions” type of guy that said little. But he was a lone drifter, so it doesn’t have the same feeling as just following another guy around the whole movie and not really saying much. I did love how everyone reacted to Django riding a horse into town, though, and the usage of Jim Croce’s I Got a Name, but I guess I just wanted it to go a step further.

One of the most surprising aspects of the film is that I didn’t find it to be a pastiche of the spaghetti western genre (or westerns in general, for that matter), nor did I find it a pastiche of blaxploitation films, although elements of all are present. Instead it feels like a pastiche of Tarantino movies, gathering elements from his own films and regurgitating them back out as something “new.” Tarantino’s ego has grown to the point that he’s not just referencing the films he loves, he’s now referencing himself, creating a strange, inbred movie that feels like Tarantino at his most self-indulgent. It’s like the overly talky second part of Kill Bill, but with western iconography. So while this film may look like “Tarantino’s Western,” that distinction still clearly rests with Inglourious Basterds, the film that looks like “Tarantino’s Men on a Mission Movie.” 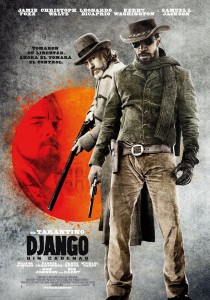 And the over-the-top violence. I love over-the-top gore and violence. Any regular reader of the site knows this. But the shit in Django is just ridiculous. I can somewhat understand where he’s coming from by amping up the violence; it’s like Newton’s Third Law of Motion: “For every action, there is an equal and opposite reaction.” The abusive violence and racist filth used by the slave owners is unforgivably brutal, so therefore Django will strike back in equally filthy and brutal ways. OK, fine. But wouldn’t the explosive acts of violence, with what have to be the largest squibs in movie history, have more effect if they had some tension behind them? The scene between Django and the Brittle Brothers was intense and a highlight of the movie, and I wish every encounter held that kind of raw power. Tarantino proved he was an absolute master of tension in Basterds, so why isn’t it laid on thick throughout most of Django? I just don’t get it. I understand that he loves old-school exploitation films, and that they also had over-the-top violence, but the violence in Django doesn’t serve much purpose other than to be viscerally exciting and sensationalist.

On a more positive note, the cinematography is excellent and frequently looks stunning. The blood spraying on the cotton that features prominently in the trailer is probably the best shot in the film, but the entire snow sequence also looks amazing. It’s a handsomely mounted production, with perfect set design, costuming and anachronistic musical choices that usually work pretty well (even if I did think the hip-hop over the slo-mo violence was a little too modern and obvious a choice). It’s a shame because amidst all my problems there is a lot to like here (and perhaps I’ll get more out of it on a re-watch). If Tarantino had been reined in a bit, and perhaps cut the film down to below two hours, it would have worked a lot better for me.

I had high hopes that Tarantino’s love of westerns and genuinely affecting revenge tales would make for one of the best films of the year. Instead, I got a film riddled with reminders of Tarantino’s self-indulgent and juvenile tendencies. Even still, I respect Tarantino immensely for making a film about slavery that other filmmakers would never touch. I may not have liked it overall, but it doesn’t change the fact that it’s incendiary enough to incite a lot of discussion and critique. Would I rather have seen a black filmmaker take on slavery? You bet, but because Hollywood is the way it is, we might never see that. Hopefully Django does crack the ice a bit, allowing for more careful dissection of America’s dark, racist past.

Oh, and why is he still casting himself in his movies? I wish theaters had those roller coaster cameras so that I had a photograph of my face the moment he came on-screen. Let me tell you: it woulda been a keeper.

I feel like there’s so much more to talk about, but I’m fairly tapped out at this point. My head is swimming with so many thoughts on this movie; it’s hard to get them all down in one go. So if you’ve got an opinion, please share it in the comments, because no matter what I think of the movie it’s definitely one that is easily talked about.