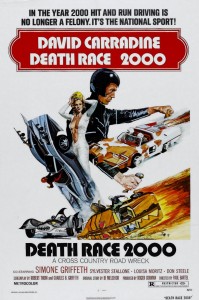 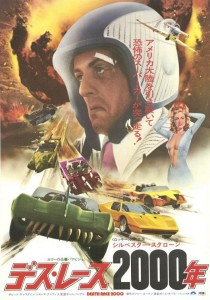 Anyway, the plot is super simple: Frankenstein (David Carradine) is the most badass racer in the US, augmented by replacement, artificial limbs, and sporting a dope, skin-tight black leather suit and a super-cool car that looks like a monster. He’s racing against four other cars to get to New L.A., hitting as many pedestrians along the way as they can, racking up extra points for babies and the elderly. And that’s it. Pretty much. That’s as much as you need to know going into it anyway. The race is all televised for the public’s enjoyment, much like reality TV is now, so there’s a heavy dose of effective satire and still-relevant social commentary going on as well.

The two major components to Death Race 2000‘s continued success are the comedy and the car chase scenes. At least for me. You might think the gratuitous nudity during the pit stop scenes is more “exciting,” and just the fact that there could be that argument shows that low-budget films of the 1970s are a far cut above the genre’s current offerings. Instead of having one thing and driving it into the ground, Death Race 2000 has more prurient and trashy delights than you can digest in one viewing.

But before I got sidetracked I was gonna talk about the over-the-top, dark comedy. Maybe it’s just me, but I usually laugh at fucked up things. When the first pedestrian gets murdered, I was howling. When the newscaster explained the updated point values for each group of pedestrians, I giggled with glee. And when one of the cars breaks up a picnic and a character yells, “If they scatter, go for the mother and the baby!,” I was getting one hell of an ab workout. This movie is hilariously fucked up, like any truly great social satire is. 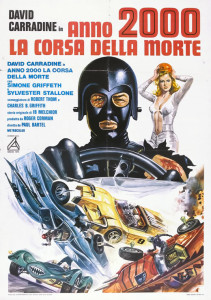 A pre-Rocky Sylvester Stallone is superb as our main villain, playing a mobster named “Machine-Gun” Joe Viterbo who has twin Tommy guns on his front fenders and a gigantic knife mounted on his hood. Viterbo Clan ain’t nuttin’ to fuck with. He’s loud, garish, and in his introduction even shows us the wonderful “wildly firing a gun” face that would later make up something like 75% of Rambo: First Blood Part II (and thus machine-gunning his way into my heart), as well as becoming a recurring & integral visual motif in nearly every other movie he’s ever been in. It’s one of Stallone’s iconic traits, so it was an absolute pleasure to get a small taste of it here.

So I’ve managed to go this long without talking about the major component of this film: the racing. Not only are the cars incredibly fun to look at, the race sequences are really well-filmed and thoroughly exciting. They aren’t exactly what you’d expect out of a race scene, but they definitely entertain completely. Certain shots are sped up to simulate the cars going much faster, so modern viewers will definitely laugh and point and deride the film for being so despicably old, but they’re simply missing the point and should perhaps stick with the Jason Statham remake.

And as a futuristic film representing the year 2000, it takes a very interesting approach to the science fiction film. There’s virtually no ultra-cool tech in the film at all; the only thing I can think of is the strangely shaped microphones the TV personalities use. Regardless of this, Death Race 2000 still feels like an alternate future. Certain key lines of dialogue support this fact, but the main reason is all that fantastic satire. When the first victim’s widow received a trip to Acapulco and a giant-screen TV for her loss, it feels like a perfect extrapolation of our game show-obsessed, materialistic culture. It’s stunning how some simple world-building and some key lines of dialogue can set the audience’s mindset to where it needs to be to believe in a far-flung film, and it shows that low-budget cinema can achieve anything within the filmmaker’s imagination as long as they approach it correctly.

If you’ve ever joked about running down pedestrians, or asked your friend, “How much for the old lady?” then you simply must watch Death Race 2000. Maybe it says a lot about our current society that this film and its violent, over-the-top future society don’t seem too much different from our current reality, but I was too busy laughing at all the fun moments of gore to explore that topic in depth.

Futures Passed continues tomorrow with a vision of 2001 a fair bit more fantastical than the real year. Any guesses?