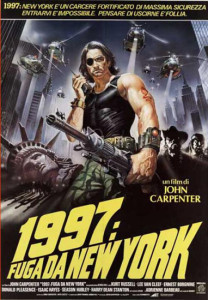 Despite this wonderful premise, this was always a hard film for me to get a handle on. I first saw it in my teenage years, after I had already been a Carpenter fan for a while. My initial response was enjoyment, but also some disappointment that it wasn’t more wild and crazy. I had heard so much about it, and I was expecting something more. Going into the film this time around, I forgot about all this and once again let my expectations get out of hand.

I found myself watching the film and waiting for all the wild and crazy shit I thought I remembered about it, but, of course, they never really came. On top of that, I started the movie late, fell asleep a couple of times and my mood going into the film just wasn’t conducive to a good experience. The film’s tone was too serious for me on that night, and I finished the movie with a disappointed feeling. I needed to write this review, but I had an overwhelming feeling that I didn’t really watch the movie, in spite of just watching it. It was at this point that I decided to do something completely unprecedented in the history of Silver Emulsion: I would watch the movie again.

Upon re-watch, everything changed. With the film fresh in my mind, I approached every scene with a distinct knowledge of what it was trying to achieve and what would come after. This allowed me to focus on the details, and I now see the film for what it is: a perfect science fiction movie that gets by phenomenally by utilizing what it has to the best of its abilities. It’s strange that it would take such a long-winded route for me to get inside this film and love it, but it did, and I’m glad I took the extra time to watch it again. It revealed to me that my previous poor experience was directly related to my tiredness and my failed expectations based on memories of wild and crazy action featuring a heroic Snake Plissken.

Those familiar with the film should see the flaw in my initial logic immediately: Snake is anything but a heroic figure. He’s one of film’s great anti-heroes, and his actions are dictated only by what needs to be done in the moment to save his own skin. He has no patience for assholes that betray him, but if you happen to also hold a key piece of information that is crucial to his survival, Snake has no issue teaming back up with you for the moment. Snake is such a great character, a sci-fi take on Eastwood’s Man With No Name from Leone’s films, and Kurt Russell plays the gruff, no-nonsense dude flawlessly. The Carpenter/Russell duo would later go on to reverse this character with Jack Burton in Big Trouble in Little China, a man who’s all talk and little action to Snake’s all action and little talk. 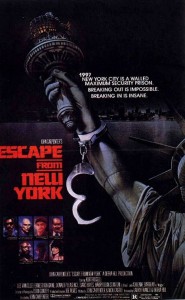 Watching it the second time in the space of a couple of days, I also found myself actively looking for the moment when the film loses steam. I remember losing interest and fading out somewhere about 35–45 minutes into the film, but I never found that moment. Escape from New York is a perfect example of slowly ramping up the tension by throwing our main character into fucked up situation after fucked up situation, escalating the film to a rousing finale on the mined 69th Street Bridge. So with this new understanding of what the film was going for (and achieved), I have no choice but to award the film four stars. This is not a traditional film, but one to experience viscerally along with Snake. When taken this way, the film offers nothing but entertainment, without a single flaw along the way.

And not only does it feature no flaws, it also has a bunch of amazing strengths. First: the cast! Between Kurt Russell, Harry Dean Stanton, Isaac Hayes and Ernest Borgnine you’ve got one hell of a line-up, but then Carpenter also throws in Adrienne Barbeau, Donald Pleasence and Lee Van Cleef! It’s remarkable that he was able to get such a stellar cast for this little movie, and it pays dividends consistently throughout the film. The second, huge strength are the FX, specifically the computer graphics. They must have wowed considerably in 1981, and even now they look pretty damn impressive. I just read on Wikipedia that they were actually the scale models of New York shot in a special way so that they looked like a green wire-frame image. Oh, what I wouldn’t give for a modern genre film to be that ingenious. And last but not least: the wonderful synth score by John Carpenter and Alan Howath. The pulsating music perfectly punctuates the dark, gritty look of the devastated city and helps to set the mood and the tone. This music, like all John Carpenter scores, is dope and is as much of the experience of a John Carpenter movie as the visuals are.

But I think the most impressive aspect of the production is the fact that this still feels like a cohesive future scenario. Not only does the premise still seem somewhat plausible, it honestly never feels like a fabricated future to me. The devastated city of the night that most of the film is set in feels truly devastated and overrun with thugs and murderers, exemplified by a few scenes where zombie-ish hordes of cretins swarm Snake, recalling something of Carpenter’s early masterpiece Assault on Precinct 13. This future still works because Carpenter never sought to show us an idyllic future with great tech. Escape from New York is almost always rooted in reality, and these ties to reality still ring true.

It took me a long-winded route to get there, but it was worth the effort. Escape from New York is not only a fantastic, dystopic science fiction film, it’s also one of Carpenter’s best constructed films. It’s not nearly as fun as his other films, but I don’t know if there’s a better piece of work in his entire filmography. If you haven’t seen it, set your expectations accordingly and let ‘er rip. Escape from New York is a must-see for Carpenter fans and lovers of alternate futures.

Futures Passed is off to a great start with Escape from New York‘s version of 1997, and tomorrow we bring you a look into the Japan of 1999. Any guesses?