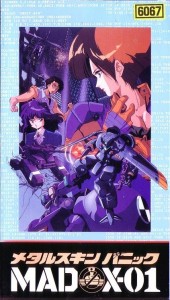 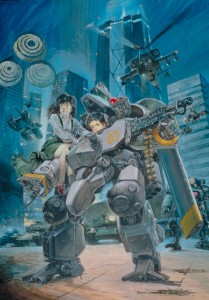 This is where the film is its best and worst. The townsfolk have the most blasé reactions to the huge clunky thing, and life pretty much goes on normally around him, except for the occasional wall that he crashes through. It gives us some great moments of stupidity so grand they can only be funny. Why would a couple of hoodlums try to run a robot off the road? Obviously they’re stupid. But why does MADOX have chainsaws built into its wings? Obviously the military foresaw its ability to humiliate random assholes on the road.

I found the deadpan delivery for this segment worked rather well at keeping the scenes entertaining. Of course I am generally of the opinion that comedic exaggeration usually works against humor, so if you have different feelings on the matter, these moments may strike you as drab and monotonous.

The part of the film that shows us what everyday life would be like if you were stuck in a high-tech super armor doesn’t last very long, though. Soon enough, the military tracks down their wayward secret weapon, and the real action begins. Koji must take down secret service agents, military helicopters, another prototype robot, and even a miniature tank that was, for some strange reason, designed to drive up stairways and equipped with grappling hooks.

The action is pretty solid, though it’s nothing amazing. The animation is also solid, and actually pretty damn good for the ’80s. Until I saw the release date I had assumed it was an early ’90s creation. None of it is truly amazing, but it all holds together well enough at making some satisfying action sequences.

The biggest problem in the second half is that nothing really feels important. This isn’t some epic struggle for the fate of the world or anything, it’s just some moron out for a joyride. There’s a lot of action, but it all feels too inconsequential to make the story compelling.

It never does anything superb, but mecha action fans will surely be able to find something of value here. And if you’re willing to avoid taking it seriously, MADOX can be a fun little show, although it’s more of a snack than a meal.