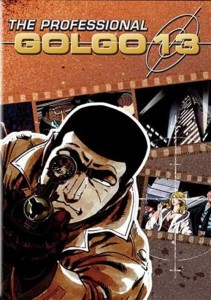 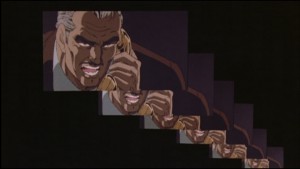 What this adds up to is a film without much depth. It’s a simple action film with a lot of gratuitous nudity sprinkled in, and that’s all there is to it. Sure it has a complicated enough plot as Golgo tries to complete a series of assassinations while being targeted himself, and there are a few clever twists as Golgo tries to figure out who is trying to have him killed and why. But none of it was surprising or particularly impressive. It’s fun enough as a thrill ride, but don’t expect anything more than that.

The aspect that stands out the most is the bizarre camera angles Osamu Dezaki used at times. He is very fond of triple takes, mirrored images, and split-screen shots to show something from multiple angles at the same time, or just duplicated for some incomprehensible reason (I’m going to assume there was a reason, anyway). He clearly wanted the less actiony moments to feel dynamic and riveting, but I think he went a bit overboard. I mean, did it really help to see a dozen repeated images of a guy shouting into a phone? I think I would have gotten the point just fine with a single shot. 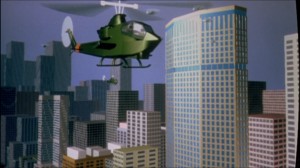 The biggest surprise he threw me with his attempts at fancy directing is the CG scene towards the end. This may not be the oldest anime to use CG, but it sure is the oldest I’ve ever seen, and the only time I have seen CG in an ’80s anime. I didn’t even think they were capable of it at the time, but obviously I was wrong. Ordinarily, I am disgusted by CG, especially with the low-quality production that was undoubtedly the best they could get in the ’80s. Here, however, it came as such a surprise, and it was so bad looking, that all I could do was howl with laughter. It’s so bad it’s good, and made even better by the fact that it had no value to the plot in the first place.  Maybe I should have expected it after the opening credits had its own ludicrous, laughter inducing CG skeletons, but I didn’t. 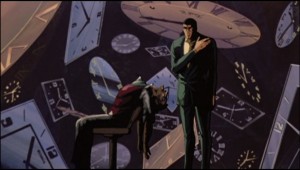 Dezaki clearly wanted this film to stand out and grab your attention, but if an assassin killing people and having rampant sex isn’t enough to hold your attention, strange visuals aren’t going to make you any more interested. Maybe he wanted to give the film an artsy feel to make up for its trashy nature. Either way, it was mostly distracting, although at times it pulled off some cool effects, like the guy who gets shot in the chest, spraying blood into the air, then falls over while his blood falls back down on him like rain.

Golgo 13‘s biggest problem is a complete lack of connection to the audience. None of the characters have any depth or personality, and Golgo himself is nothing more than a remorseless gun for hire. We can’t feel any sympathy for the characters, and so we don’t have much reason to care how things turn out. It entertains, but that’s it. I don’t mean to sound too down on this film.  As long as you don’t expect anything more than sex and violence, you’ll be fine. So if you wish James Bond had more gore and nudity, then Golgo 13 just might be what you’re looking for.