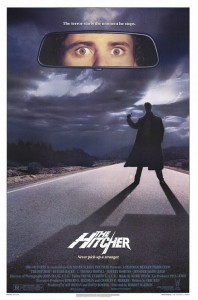 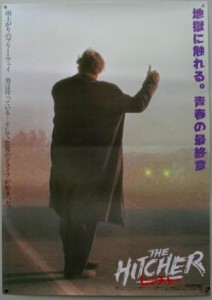 Hauer is never over the top or wild in his characterizations, in fact he plays the killer as a calm, subtle individual and his performance is what takes the film into overdrive. Unfortunately, he’s not in the movie all that much, or at least not enough to quench my desire for his character, but every moment he is on-screen is electric. C. Thomas Howell on the other hand is a little too over the top and I never really liked him. Perhaps a better actor would’ve made The Hitcher a better movie, but Howell’s young character makes some stupid decisions over the course of the film that I think wouldn’t have been as believable with a better actor. Kind of a roundabout way to saying that I think Howell fits the film well, but as I didn’t actively have that thought while watching I had to come around to it myself.

Directed by Robert Harmon, the film is very well-shot and exhibits something of a similar feel to a film I did earlier this month, Near Dark. This is interesting to me as both films were scripted by Eric Red, and they both exhibit a multi-genre flair. Is it a coincidence, or do his words simply bring to life a haunted, deliberately paced world full of ordinary men who are actually monsters? Supposedly his original draft of the script was much more horrific and filled with all kinds of gruesome murders… basically everything that happens off-screen in the film was supposed to be graphic violence on-screen. That definitely would’ve translated to a much more sadistic film, and I wonder how the critics who thought it was awful would receive that version. Anyway, while I enjoy practical FX, and seeing how they would’ve brought some of those off-screen moments alive would’ve been interesting, it is absolutely the right choice not to show much of the actual killings that Hauer performs. In doing this the exploitative nature of the film is kept at bay for the most part, thus allowing the film to be taken more seriously.

But therein lies another issue with The Hitcher: it’s so ridiculously unbelievable. It never really bothered me, as I saw the film as a simple fun thrill ride, but its unbelievability holds it back from being a truly great thriller. The cops here are as inept as they’ve ever been in a film, and as I mentioned before Howell does some truly questionable shit for a man trying to prove his innocence. Hauer also has near supernatural abilities to be in the right place at the right time, and is apparently masterminding the entire experience from… somewhere. It’s a huge stretch, but it does make for a fun movie.

The Hitcher is not a film to take seriously, but it is one to have fun with. Many might find it hard to have fun with a movie about a killer with no motive doing some truly reprehensible things, and I think this exact reason is why the film is generally considered within the horror genre. It takes a specific type of mind to glean enjoyment from a film this corrupt in spirit, and horror fans are just the right amount depraved to do just that. I fully enjoyed it, and if nothing else, it’s worth it just to see Rutger Hauer take down a helicopter with a few pistol shots while speeding down a dirt road in a truck. Let’s see any modern day villain pull that shit off.