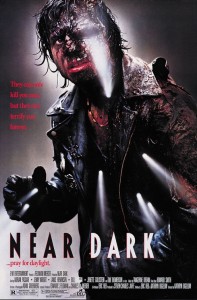 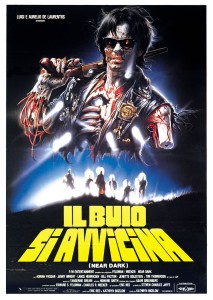 As a revisionist work, it doesn’t specifically hold itself to either genre’s expectations, and Near Dark is neither scary or set in the Old West. Instead it takes some of the more standard western scenes such as the outlaws taking control of a tavern through fear, and re-imagines them if the outlaws were vampires. This particular scene is rather chilling, as it becomes readily apparent that the vampires neither fear death or value mortal life. They toy with the people in the bar like a cat squeezing the last ounce of fight out of its prey. It’s in these moments, when the genre tropes are most obviously reworked before your eyes, that I was the most engaged, and they are what makes Near Dark the cult favorite that it is.

The actors help out quite a bit too, with Lance Henriksen turning in a stunning performance as the leader of the outlaw group. You may have seen someone spit out a bullet in another film, but Henriksen does it so well you actually believe he’s capable of doing it. I’ve always been a big fan of his ever since I saw Aliens as a kid, and his work here is some of the best of his career. Bill Paxton, an actor I can’t say I have the same love for, does a great job as the cocky vampire, inhabiting the role with the fresh energy it demands. Jenny Wright also does a great job in her influential role, and it was great to see Tim Thomerson play someone other than Jack Deth. Turns out the guy can actually do another type of character, who knew?

Bigelow’s most recent film was The Hurt Locker, and I remember being surprised at the meditative pace and careful shot composition on display there. I certainly didn’t remember Point Break (another Bigelow film) being anything like that, but if I had been familiar with Near Dark then it all would have made sense. Near Dark is stunningly shot, with gorgeous cinematography throughout. The sun plays a huge role in the story, as it does in any vampire tale, and Bigelow captures the rise of the sun gorgeously. The varying colors of the sky as the sun gets closer to breaking the horizon, and spelling certain death for the vamps, are impressive and make for one of the nicest looking horror films of the ’80s.

I must also mention the fantastic, thrilling score by Tangerine Dream. Their work here is excellent, and reminds me greatly of Vangelis’s iconic score for Blade Runner. Their lush soundscapes not only score the film, but add character and become one with the visuals. Tangerine Dream’s ability to weave melodies together, along with Bigelow’s slow, methodical pacing, lulls you into the spell of the film; I can’t imagine one without the other.

Near Dark is an incredibly interesting take on the horror genre and fans should definitely seek it out. It might be too slow-paced for some, but I think it more than makes up for that with some truly great, memorable scenes, and more than its share of incredible, awesome explosions. Yup, that’s right, explosions. You wouldn’t think this would have any, but it has some great ones that you aren’t likely to forget. It does have one plot point that might be hard to swallow for hardlined horror fans (like myself), but if you’re willing to roll with it, Near Dark is near perfect.