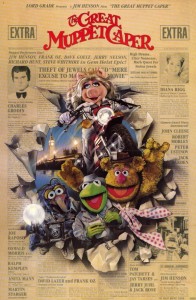 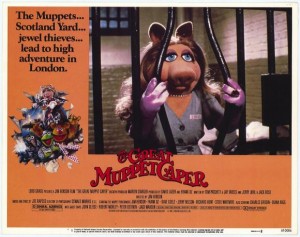 The first thing that struck me about the film was just how funny it still is. Sure, I didn’t laugh every time someone asked “What color are their hands now?” after Kermit said that they’d catch the thieves red-handed, but most of the other jokes still had me laughing out loud. While that might sound like my humor hasn’t matured, I would argue that instead the Muppets’ humor was always of a high enough quality to elicit laughs from people of all ages. I was also surprised by the darkness of some of the jokes, including Gonzo wondering how far you could plummet from the sky before blacking out, and an old man telling Gonzo to buzz off as he was with his mistress. As I mentioned in the review for The Muppet Movie, these are simply jokes that would never be allowed in a modern movie for kids, and it makes me sad to be confronted directly with exactly how far our country has regressed into white-washing everything that kids consume (all the while the Internet providing them with literally anything they can imagine).

Anyway, I think The Great Muppet Caper surpasses The Muppet Movie in terms of sheer fantasy, and in the amount of wild stuff they figured out to do with the puppets. Almost everything in the film is completely seamless, bringing the Muppets to life within our world, and thus unlocking the door to fantasy for small children everywhere. Anything is possible after you’ve seen Miss Piggy synchronize swim in a classically staged dream sequence. Kermit also recalls Fred Astaire or Gene Kelly in his song about getting dressed, as he playfully dances on the bed, and any time a puppet can remind me of Fred Astaire or Gene Kelly’s graceful movements, you know you’re doing something right behind the scenes. The Muppets are still so full of life and believable to me that at times I have a hard time believing that they’re nothing more than felt and a dude’s hand. 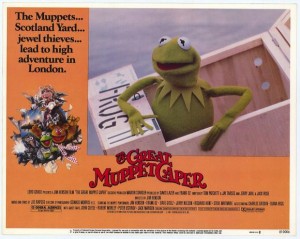 Jim Henson took over the directorial reins this time, and he does a great job. Perhaps there are less classically framed, beautiful shots to fill up the screen, but the shots are always in service of making the Muppets come to life in the best way possible. In addition to the great puppet performances from the leads, Henson was also able to get great, over-the-top performances from Diana Rigg and Charles Grodin, the two main human performers. The cameos are far fewer here, but I especially enjoyed each and every one, this time from a few classic British actors such as John Cleese and Peter Ustinov.

And as a musical, I simply must mention how much I enjoy every second of the music. Part of this is the fact that it’s all engrained in my head from a ridiculous number of watches as a kid, but I still genuinely enjoyed it. But as my girlfriend remarked after it was all over, it is all very old-fashioned. I don’t mind a bit, and as Henson was specifically playing off of 1930s musicals (such as the synchronized swim scene of Footlight Parade), or recalling Astaire or Kelly as I mentioned above, it’s clear that he’s looking to recapture some of that old magic that he must have loved when he was younger. So for fans that jumped on-board with the latest film, I think this one will be a hard sell, but for fans of classic musicals I think this one holds up rather well.