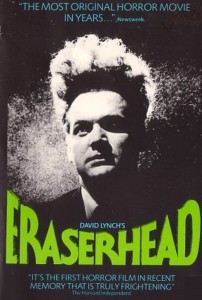 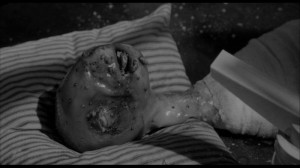 I expected Lynch’s first film to be much more obtuse and hard to crack, but instead I found it rather straightforward. In so much as a disembodied celestial opening scene that represents sex can be straightforward anyway. So yeah, this whole movie is about sex and Henry’s inability to deal with the fact that his moment of passion resulted in a hideous mutant child. At one point I thought the child’s mutant looks were purely in the mind of Henry, but then I remembered the baby mama stating that the doctors weren’t even sure if it was a child. So if that’s the case, then I suppose the baby is a direct representation of radiation-effected birth defects, but that’s all beside the point. What Eraserhead does, and does well, is present the sheer terror Henry feels when he’s trying to come to terms with the fact that he now must care for this small, helpless being.

Henry manifests his frustration at his lack of contraception by dreaming of a God-like woman playfully stomping the giant-sized sperm as they rain down on her stage. The dream shifts and Henry’s head pops off and the child takes over his body, his mutated head forcing its way up out of Henry’s neck. Then Henry’s decapitated head falls to Earth and a small boy picks it up. He takes it to a black market pencil maker to sell its flesh for the manufacture of erasers. Henry is preoccupied that the responsibility of taking care of the child will strip away his self-identity. He will become nothing more than a worker in the factory, slowly giving himself over to his job piece by piece until he’s gone in every sense of the word. Someone’s gotta pay for this child’s college education, and that shit ain’t cheap. Whatever joy he had previously in his life — and judging from the state of the world that’s not much… but it’s all about personal perception — will be replaced by an endless cycle of hard work and sacrifice. Eraserhead is perhaps one of the best promotional films for abstinence I’ve ever seen.

But by far the most prominent symbolic motif in Eraserhead, though, is the penis, and I’m not talking about the schoolyard “penises look like eraser heads” thing. In addition to losing his self-identity, Henry is also incredibly emasculated. His father-in-law boasts of “laying pipe” all around the neighborhood (if you know what I mean). Sure, he’s a plumber, but in a film this ripe with symbolism you can’t take that shit at face value. My favorite, though, is when Henry opens a tiny box to reveal a minute, shriveled worm-penis, which he then promptly hides away in a wooden cabinet at his bedside. Close enough if you really need to use it, but out of arm’s reach in case a moment’s passion overtakes you. And we — not to mention Henry — wouldn’t want that to happen; no one wants more mutants around. Henry can’t stop his urges though, and he dreams of the worm-penis dancing joyfully and sliding in and out of many different holes. Before long, Henry finds himself at his door allowing the red-lipsticked temptress from across the hall into his room, and then into his bed. Of course, his bed is no longer just a bed, it’s a giant hot tub bed filled with “white fluid.” Maybe this is where Tim Kincaid got the idea for the finale of his trashy 1986 flick Breeders, where a bevy of naked females writhed in a tub full of alien cum. I didn’t think any movie would ever make me think, “Wow, that’s kinda like that alien cum scene in Breeders,” but Eraserhead did just that. The scene also illustrates Lynch’s masterful use of editing, as this scene (and most of the film) is played without dialogue and the plot is communicated to the viewer directly through the cuts.

Lynch exhibits such a confident power over imagery and cinematography in Eraserhead, it would be hard not to be impressed by the film. I can understand if you don’t like the narrative content, but the visuals are truly fantastic. They aren’t flashy, but they are beautifully filmed and quite evocative. The world constructed by Lynch is fully formed as well, feeling otherworldly, yet somehow futuristic with a strong dream-haze draped over the whole thing. Technically, I think the film is a genius piece of work, remarkably strong and confident for a first feature, but it’s also a movie that will never achieve mainstream love regardless of its technical proficiency. But that’s not the point of Eraserhead at all, though if it were, perhaps the world would be slightly less over-populated. Oh, and it’s pretty slow-paced and boring at times, but the pure strangeness to the visuals, and deciphering their possible meanings, ought to be enough to keep you interested and engaged. I loved it, I hated it, Eraserhead is definitely one of the most singular film experiences you’re ever going to have. I’d recommend it to everyone, if only for the sheer enjoyment of receiving their reaction.