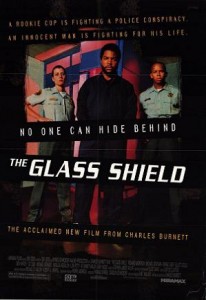 The Glass Shield is very intricate in its plotting, but at the same time it seems to include scenes that hold no bearing on anything, existing for no good reason that I could see. Perhaps the reason was subtle and I was already too drained from the film’s slow pace to notice it. Anyway, the investigation into the police corruption is interesting, but I have one major problem with it: you already know who all the corrupt cops are long before the characters are able to find the evidence to support their claims. I’ve always had a soft spot for mystery and detective fiction, and in selecting this I was hoping for something like a James Ellroy novel. If you enjoy the genre and you’re not reading Ellroy, you’re wasting your time. Anyway, I think my love of Ellroy kind of spoiled me on this one, because I’ve already seen the heights of a good police corruption story, and a clumsily told one just doesn’t fit the bill. I still enjoyed The Glass Shield, don’t get me wrong, but our awareness of the situations gives us an omniscient presence, instead of being taken along for the ride, and I just couldn’t get into it fully.

That being said, The Glass Shield does some good things too. The film opens with panels of a comic book depicting a gun battle between the police and some villainous perps. During the intro, I thought it odd and forgot about it, but thinking back on it now it makes a lot of sense. Our hero Johnson is just getting out of the Academy and his thoughts about the police force are clean and angelic. He’s going to be a cop, out there fighting crime like a superhero, with everything clearly defined as right and wrong. As the movie moves along, Johnson is progressively sideswiped again and again by the fact that this is not the case in the real world, and by the end of the movie his mental state is so shifted that it’s hard to recognize him as the same person. 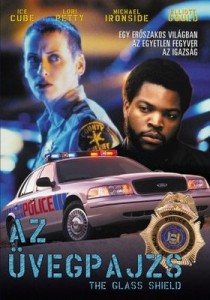 Made by notable but obscure director Charles Burnett, The Glass Shield is a very handsome looking film. It features some really stand-out cinematography with deep colors painting the landscape of LA and the corrupt police station in shades of dark blue and gold. There are times when the heightened colors are too saturated and seem a little theatrical (in the live theater sense), but overall it lends the film a unique look that adds a lot of nice visual flair. Burnett is also able to coax great performances from his cast, who do an excellent job with the tense, and often quite dense, material.

Besides burning me with false Ice Cube advertising, the thing that really bothered me about this movie was its ending. It’s one of those endings that cuts off with a million loose ends hanging, and then attempts to give you some closure by flashing some text on the screen about where our characters went after the cameras ran out of film. Not only does this cheat us from an actual ending, it seems lazy. It’s almost like they wanted to shoot more, but they ran out of money. I’m sure that wasn’t the case, but the ending just didn’t feel right to me. According to the credits this was based at least in part on a true story, so perhaps that explains the twisted and not-so-perfect nature of the corruption on display in The Glass Shield. That would also explain how unresolved everything was in the final moments, but when you’re making excuses to justify why the movie is the way it is, you know you’ve got a flawed movie on your hands.

The Glass Shield is a good movie, but it never reached its full potential due to its story issues. I also wanted more with Ice Cube, and not just because this is Ice Fest, because I think Ice Cube’s wrongly accused character would’ve helped make this movie more interesting. Perhaps that would’ve been clichéd and too obvious, but it definitely would have been more palatable. If you’re a fiend for police corruption films and you’ve exhausted all other options, I’d definitely give this one a spin. Everyone else would be better served somewhere else… like L.A. Confidential.