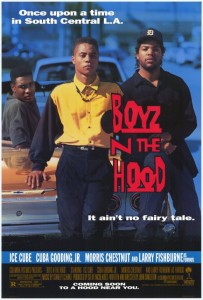 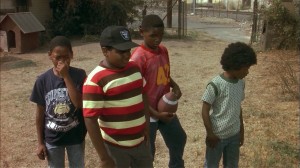 Anyway, the characters! Singleton opens the film in the 1980s when a 10-year-old Tre Styles gets into a fight at school and is sent to live with his father, Furious. Allow me a short sidenote: How badass is the name Furious Styles? Only an actor with grace and power can pull that shit off, and Laurence Fishburne does so flawlessly. Furious refuses to take any shit from Tre, instilling in him responsibility and the knowledge he needs to succeed in life. His neighborhood presents a host of other options, ones which Tre’s friends are more susceptible to without Furious to guide them. This might seem like an average set-up for a gangland coming-of-age story, but Boyz n the Hood manages to transcend its simple framework and get inside the characters so deep that when one of them passes on, it feels like a real death. I watch a lot of movies where people are murdered, even main characters, but I rarely feel like anyone has actually died. Singleton manages to capture the varied emotions and the intense feeling of loss that the death of a loved one brings, and it’s absolutely crushing to watch.

What’s also absolutely crushing about Boyz n the Hood is the acting. Everyone, and I mean everyone, turns in a phenomenal performance. The writing is strong, and the direction is the top-shelf goods, but without acting to bring it all home to the viewer, we’re nowhere. Singleton’s casting is impeccable, and pegging Cuba Gooding, Jr. as the promising kid and Ice Cube as his bad influence neighbor from across the street is brilliant. The two actors play off each other like old friends and both show they have what it takes to become the fine actors we know they have become. Sure, he’s playing a character that’s close to home for him, but I don’t wanna hear nothing about Ice Cube being a shitty actor. Watch Boyz n the Hood, and then say that shit, bitch! We got a problem here? 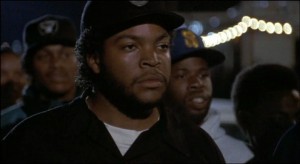 But by far, my favorite character was Furious. Laurence Fishburne has always been a favorite actor of mine, but this has to be, hands down, my favorite performance of his. Part of it is how much I loved his character, the voice of reason opposing gentrification and senseless violence against one’s own people. Part of it is Fishburne’s quiet portrayal that’s brimming with intensity just under the surface. Part of it is just that smooth, sexy voice of his. Fishburne is nothing short of fantastic here.

Beyond the coming of age story, Boyz n the Hood is about how violence only leads to more violence. For the most part, it’s a character drama that contains very little in the way of crime or criminals. It carefully sets up its characters and the world they live in with such vivid detail you might think you’re watching a documentary at times. So when the violence does finally come around, it hits hard and fast just like in real life. Even though you’ve known it was coming the whole movie, the resulting pain and sadness aren’t diminished in the slightest. The film opens with some statistics about black-on-black murders, followed by the first image of the film: a stop sign on the corner. The message is clear right from the get-go, but the journey that it takes to prove its point is one of true heart and integrity. I’m in the interesting position of never having seen another Singleton film too, so I will definitely be checking out more from him based on the strength of his storytelling here.

Boyz n the Hood and New Jack City are movies about black criminals, but both come from a place of hoping to better the people who see it, instead of simply glorifying the gangster lifestyle. The first half hour of Boyz n the Hood also suggests what might be if there were a black-focused Stand By Me or The Goonies, and while Attack the Block was definitely in that vein, I can’t ignore the fact that all the kids in that were delinquents performing petty burglary and other similar offenses. Again I’m generalizing, but I’m just beating around the bush trying to say that we need more ethnic equality in film. There are loads of incredible actors of all races out there just dying for a shot at playing a role based solely on the quality of their performance. Boyz n the Hood features a host of great performances and is an absolute triumph.