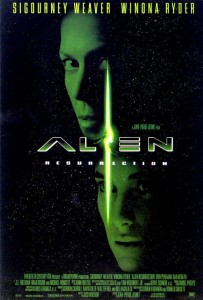 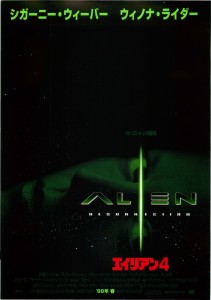 Remember those things from Alien called story, pacing and atmosphere? Forget all knowledge you have of them because those memories will only turn on you as the film progresses. While Alien: Resurrection does feature some great spaceship atmosphere that I fully enjoyed, it’s nothing compared to any of the previous films because the spaceship is quite generic. It’s still a fun place to explore, but this is more of a variation on established spaceship ideas instead of anything that’s going to ignite your imagination. The pacing of the film is also wildly uneven, ready and willing to start and stop on a dime. And the story… man, it’s just so over the top and ridiculous.

But, the thing about watching Alien: Resurrection this time around was that none of its faults really bothered me. I knew going in it was a piece of shit, so I expected nothing and got a wealth of B-movie moments in return. I actively remembered the shit that angered me so much when I initially saw this movie, but instead of scoffing in disgust I laughed my ass off. It’s quite liberating to release the anger inside and just have a good time. The key to achieving Alien: Resurrection nirvana is in shifting your mental perception so that you’re watching the film as if it were an issue of Marvel’s What If? series. What if they cloned Ripley, and she also freakishly gained some of the alien’s powers, and then she had sex with the alien queen that she hosted, and then we got a French guy with no experience in horror or genre films to make it? 15 years ago, I wanted no part of this, but now I’ll gladly take it.

Speaking of Jean-Pierre Jeunet, I have to wonder what all the involved parties were thinking hiring him as the director. I’ve only seen one of his other films, Amelie, and he made that directly after Alien: Resurrection so I have no clue what the execs saw in his previous two films (Delicatessen and The City of Lost Children) to have him make his American début on an Alien film. For all intents and purposes, he seems to do an admirable job with the material he’s given, except for some really awful moments involving a lot of quick cutting between extreme close-ups during action scenes which makes it nearly impossible to know what’s going on. The rest of the camera work is pretty good though, with lots of sweeping, moving shots that reminds me a lot of Sam Raimi’s early work on The Evil Dead films.

The characters of Alien: Resurrection are also better than you’d expect. The overall group is much better than what we were given in Alien 3, and while none of them are especially likable, they are a lot of fun to watch on-screen. Ron Perlman is deliciously over the top, and it’s fun to wonder whether it’s his acting or the alien’s acidic blood that’s chewing up all those holes in the sets. Winona Ryder is Winona Ryder, which is to say that she’s not that great, but for some reason I still like her and I welcomed her here, even if she was miscast and a colossal leap down from the last android in the series: Lance Henrikson’s Bishop. However, her character does have one of the most hilarious moments of the film when she confesses to Ripley that she hates herself. While it makes no sense whatsoever to create a self-hating robot, I love that somewhere, somehow, some android manufacturer in the future is creating artificial life so complete that they come with their own neuroses.

I’m sure Alien: Resurrection isn’t what Ridley Scott or James Cameron had in mind when they made allusions to scientists using the aliens for their own purposes, but I am an absolute sucker for stories involving megalomaniacal corporations doing wildly dangerous shit in the name of the almighty dollar. Not to mention how much I love movies that feature aborted fetuses in giant test tubes, and Alien: Resurrection has some killer aborted fetuses. Straight to the heart, man, I can’t fight the power that their twisted, fucked up bodies hold over me. Oh, and let’s not forget the first scene in the series featuring the aliens communicating with one another! Being the one-track minded killers they are, it’s an argument and I instantly imagined them with LA Cholo voices saying shit like, “What’d you say, fool?,” “Get him, Holmes!” and “That’s what I thought!” There’s many different audio tracks on this Blu-ray set, but where’s that one? Hit me up for the next box set, 20th Century Fox, I’m available.

Sure, Alien: Resurrection is a total abomination for the Alien franchise, but do yourself a favor: get over it and have a good time. It really does feature some impressive FX work and set design, and you can’t argue with the amount of insanity and pure ridiculousness on display here. The CG aliens are far superior to their counterparts in Alien 3, and they really didn’t bother me at all. I’d rather they weren’t there, but who cares, most of the movie is classic “dude in a suit” stuff anyway, so it’s not a big deal. Fuck the haters, Alien: Resurrection is a fun thrill ride of trash.