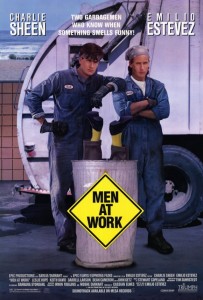 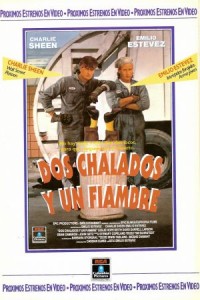 Yeah, it’s kind of a complicated plot for a simple comedy of errors, but whatever, it’s the ’80s… I mean the early ’90s, so anything flew for a plot in those days. Filmmakers were once carefree to shoot whatever the fuck their little artistic hearts desired, and we were there to reap the benefits. In Men at Work the intrigue actually makes for quite an enjoyable little movie, with its twists and turns skillfully intersecting and joining up in fun ways. The only problem is that about halfway through the film, all that ends and the rest of the film is a non-stop parade of nonsense. While that might sound fun (and parts of it are), it doesn’t do justice to anything built up in the first half and leaves you wondering how much longer we will have to endure this.

Emilio and Charlie perform well, but it’s the introduction of Keith David’s character that takes the film to the next level. I’m a big Keith David fan so perhaps I’m biased, but I loved him in this. He’s perfect as the ex-military guy who’s doing a ride-along to make sure our heroes don’t bang anymore trash can lids. No, I’m not making that up. As the guys are leaving Garbage HQ, their barking garbage chief informs them they’re through if they don’t stop their trashy antics. To make sure they stay in line, he sends out Keith David, and the rest is history.

Men at Work is far from a good film, but it does pack in a lot of comedy and entertainment. Part Rear Window, part Lethal Weapon, part Weekend at Bernie’s, the first half is actually very good, but it falls off fast into oblivion, never to return. Emilio Estevez also wrote and directed the film, so the blame is all his. I will say that it is a very handsome picture, and very well-shot. Not Kubrick quality or anything truly masterful, but good, interesting and better-than-average filmmaking. It’s definitely a better movie than that god awful Oscar-bait movie he did a few years ago, Bobby. I hated that one.

If nothing else, it was good to see another movie try the Bernie’s routine, even if it was only for a moment, and I can’t forget the part at the end when the pizza man puts a tire over a dude’s body and rolls him down the beach. I haven’t seen a good “tire put on a man” gag in a while. If I could come up with enough movies where that happens, I think that would be a great topic for a Top 10 list, don’t you?