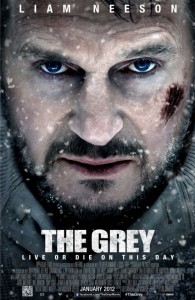 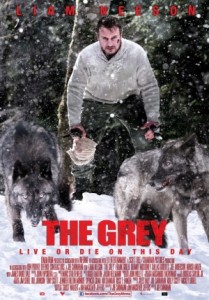 The Grey was shot on location and the scenery looks great. You get the feeling that the shoot must have been a hard one, and that the men involved were probably going through something of a male bonding ritual, just as their characters were seeking to do the same. I didn’t expect much of anything from director Joe Carnahan, but he surprised me with his skill. The film is reserved when it needs to be, but delivers the action when the story demands it, and it’s all tied together by Carnahan’s excellent work behind the camera. There is an overuse of handheld for my taste, but as always, this is something that I just have to come to terms with in regards to modern film. On that note though, the handheld during the river sequence is incredibly well done and sells the scene better than any static shot could have.

The Grey also has some spiritual and philosophical underpinnings that intrigued me. They added a depth to the film and Neeson’s character that drove the movie beyond the simple “Neeson vs. wolves” description I heard so many times before seeing this. The ending is especially great, taking a hard situation and knowing just when to cut to black for maximum impact. But then, apparently to appease those that don’t like quality endings, there is a very short after-credits scene that is dumb and unnecessary, taking some of the wind out of the last shot’s sails.

The haunting, dark music adds another layer to the film that gets inside your soul and draws you into the character’s survival mindset. The main theme is touching piano music, one of my most hated score tropes, but in The Grey it actually is touching and adds to the impact of the scene. I always love music that is evocative of a place, or of a person, and Marc Streitenfeld’s score does both. Looking up his credits, I’m not surprised to see his most recent score is for Ridley Scott’s Prometheus, whose trailer features music in the same evocative vein (Yes, I still haven’t seen it… get off my back!).

There are times when The Grey feels like a horror movie, as the men face off against the wolves in the darkness of night. Coupled with the snowy visuals and everyone’s thick parkas, I couldn’t help but be reminded of John Carpenter’s The Thing. Thankfully, this feeling only lasts through the first section of the film, as after that it moves into the more expected feel of a survival movie.

The Grey is a great film and is sure to entertain and keep you on the edge of your seat. It’s a thrilling ride, filled with despair and heart-wrenching scenes. It’s also not a film scared to make the hard choices, and for that it should be applauded. This easily could have been Homeward Bound 3 starring Liam Neeson instead of a Labrador Retriever, but it ends up being something worth seeing, and worth talking about.