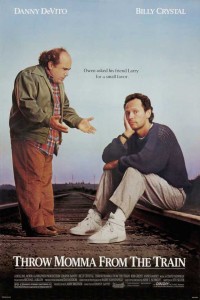 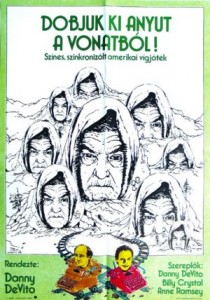 I love trains, so I expected there to be some trains in this. And there are. At the end. Oh, and when Danny DeVito’s character watches a bit of Hitchcock’s wonderful Strangers on a Train. Other than that it’s surprisingly land-based, but I guess the title Smother Mother With A Pillow must have already been taken. The film is somewhat poorly titled in this way, although I can’t argue with its provocative leanings and how it grabs your attention immediately. It also informs the prospective viewer immediately of the film’s black comedy, and thus heading off at the pass those looking to take their mother out to a pleasant night at the movies to something with a vague title like Mother and I (and Larry).

None of the characters are rather likable, but that’s OK, it’s a movie about two men seething with anger who want to kill a significant person in their lives. Did I mention it’s a comedy? It’s a lot funnier than that premise might make it sound. A lot of the laughs come in the form of bungled murder attempts, as opposed to clever dialogue writing (although there is some of that too), but honestly there’s only so many of these you can watch without getting bored. The opening half of the film is enjoyable because it’s concerned with setting up the characters and their motives, so when it turns to the more murderous half, it gets old a lot faster.

Danny DeVito also directed the film and he does so surprisingly well. This is the first of his directed films that I’ve seen and I have to say I am impressed. He’s no unsung Kubrick or anything but he showcases a good working knowledge of camera placement and movement within the film. There’s a couple of outstanding tracking shots that really have no business being as good as they are. One in particular sticks out in my mind, showing Crystal’s writing class while the sound of a telephone ring fades in and out of the soundtrack. The camera slow tracks through the class until it finally lands on Billy Crystal laying in bed with the phone ringing loudly beside him. The classroom is a setting for numerous scenes prior to this, so the audience is fooled into thinking this is yet another, but the odd sound of the telephone ring signals something more. It’s a quick moment, but it’s really inventive and effective, all achieved by the simple task of a small camera movement and placing a bed in a classroom. I shudder to think how much CGI would have been employed to get the same effect if the film were made in the last few years. Or perhaps… remade!

Throw Momma From the Train is pretty funny, but it could have been so much more.  It does have the added bonus of being about a writer who’s teaching a creative writing class though. Stories about writers always play directly to my wordy, self-indulgent heart. It also allows there to be jokes about bad, amateurish wannabe writers, such as the elderly lady who writes such thrilling, hilarious pieces as this (which she reads aloud to the class):
“Dive! Dive!” yelled the captain through the thing. So the man who makes it dive pressed a button or something and it dove. And the enemy was foiled again.
“Looks like we foiled them again,” said Dave.
“Yeah,” said the captain. “We foiled those bastards again, didn’t we Dave?”
“Yeah,” said Dave.
THE END