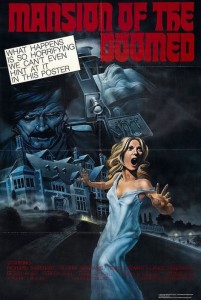 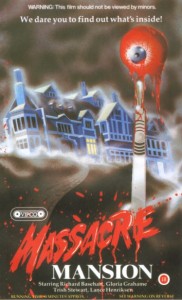 While the plot is pretty simple and rarely strays from “Oh shit! These eyes didn’t work, let’s get another subject” in the first half, it’s still pretty interesting and enjoyable to watch. Chaney isn’t a sadist as he takes no pleasure in the mutilations he performs, but it takes a seriously deranged man to hunt down people without ties, surgically remove their eyes and then lock them all in a cage in his basement. When the second half rolls around, the weight of the wrongdoing reaches the tipping point, and the people in the cage are no longer complacent. It is here where the film really hits its stride and provides lots of thrills for the demented audience.

Mansion of the Doomed features lots of talent that went on to bigger and better things (in addition to Richard Basehart who came from bigger and better things like Fellini’s La Strada or Fuller’s Fixed Bayonets!). We’ve got cinematography from Andrew Davis who later went on to direct such favorites as Seagal’s Above the Law, Under Siege and the 1993 big-screen version of The Fugitive. The editing comes to us by way of Harry Keramidas who went on to co-edit all three Back to the Future films for Robert Zemeckis. The gaffer was one Schmulik Firstenberj, who later changed his name to Sam Firstenberg and directed American Ninja and its sequel, Sho Kosugi’s Revenge of the Ninja and a bunch of other B martial arts pictures. The special FX come to us courtesy of a young Stanley Winston, who later became one of the giants in the industry working on such films as Terminator 2, the Alien franchise and Jurassic Park. And Mansion of the Doomed was directed by the veteran character actor Michael Pataki, who was in everything from Star Trek’s The Trouble with Tribbles episode (as a Klingon) to Rocky IV. In addition to all that, this is the oldest surviving Charles Band produced film, with only the lost erotica film Last Foxtrot in Burbank preceding it in his filmography. Whew!

Let’s not gloss over the FX though, because they’re pretty fucking good. Anything involving surgery or the eyes is always going to get me squirming, so I was wriggling around like a worm in a bird’s mouth through every appropriate sequence. During the surgery scenes, there’s some monitor footage of syringes puncturing eyes that looks so real I’m unable to tell if it was actual surgery footage or fabrications. Pulling the eyes from the subject’s face was definitely fake, but it looked incredibly good. The zombie-like blind captives in the basement also feature some great makeup that makes it look as if they don’t have any eyes. The faded, tired print of the movie only adds to the creepiness of the film, giving it a taboo, snuff film quality. That being said, I’d love to see a restored, widescreen print of the film, but I won’t hold my breath on ever seeing that one. Some films are just never going to get that kind of treatment.

Mansion of the Doomed surprised me and kept me engaged throughout. It reminded me a bit of Almodovar’s The Skin I Live In with the crazed, experimenting doctor plotline, but that film is definitely in a different class than this. What starts as a noble, idealistic pursuit of sight for his daughter quickly turns into a twisted, obsessive journey through one fucked-up situation after another. Mansion of the Doomed is quite the effective low-budget horror movie and I’d definitely recommend it to B-movie fans.

Next week on this journey through all of Empire International/Full Moon’s films, I’ll be reviewing the 1992 film Netherworld!