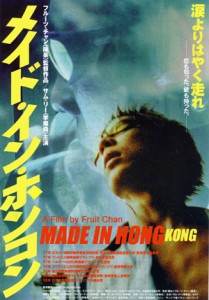 Expectations: High. I used to love this movie.

I’ve started this review three times now, and still can’t find a way to properly begin talking about this film. There’s so much going on within it, while at the same time it’s fairly devoid of a traditional plot and moves about somewhat slowly through its story. No matter how flummoxed I am at putting my thoughts to words with this film, I’m sure of one thing. I love this movie. I saw it for the first time fairly close to its Hong Kong release while I was still a teenager. It’s themes of youth and dead-end situations rang true for me, and I instantly made a connection with the film. It contained an energy and power I’d rarely seen in the movies. Hong Kong films are famous for their amazing ability to harness teams of gifted stuntmen and martial artists, but Made in Hong Kong‘s energy is of a completely different variety. It’s pure, raw, unfocused youth on film and it’s a truly impressive and one-of-a-kind experience. 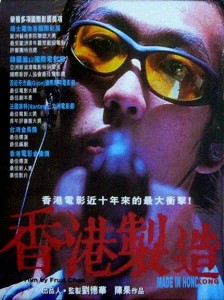 After my initial viewing many years ago, I became instantly enamored with it and based on its power, expected it to eventually break the culture barrier and receive the praise it was due in the West. The years passed and this never happened, and so I find myself finally re-watching the film nearly fifteen years later with the film just as obscure and unseen as it ever was. It’s a shame, as even up against the unrealistic, mythic status I built up for the film in my head, Made in Hong Kong inspires, excites and emotionally moves me.

I was always under the impression that this was Fruit Chan’s début film, but some research informed me it was actually his sophomore effort. It is the film that burst him onto the scene though, making the entire Hong Kong industry sit up and take notice. He had previously made a bigger budget studio picture called Finale in Blood, which was supposedly enjoyed critically, but the public failed to embrace it. I’ll have to judge for myself at some point. This brings us to Made in Hong Kong. Fruit Chan had seemingly become frustrated with the traditional Hong kong studio system and sought to completely undermine it with his second feature as a director. 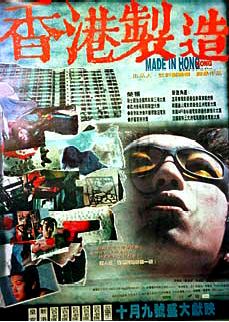 Filmed entirely with leftover and unspent film at the end of other film’s shooting reels, Made in Hong Kong feels immensely different from any Hong Kong film at the time. The actors are unknown; the shooting style is visceral and predominantly handheld. It somewhat reminds me of a Lars Von Trier Dogme ’95 film for these reasons, although this one has a lot more going for it than most of those restrictive film exercises. Made in Hong Kong is definitely artsy, but it’s not pointlessly obtuse for the sake of seeming deep. The film remains accessible through the easily relatable characters and the situations writer/director Fruit Chan places them in. Through his lens, these characters run the gamut of emotions, from dark depression to joyous friendship. Every shot looks fuckin’ gorgeous too, with some of the best costuming I’ve probably ever seen in a film. Their clothes just look so effortlessly cool.

Made in Hong Kong‘s other major strength is in its editing, and to a lesser degree its script. Fruit Chan elevates the movie to near-transcendental levels when the climax comes to a head and our lead character Autumn Moon must make the decision of his life. We see two possible outcomes simultaneously, but through the magic of editing it plays out in not only the coolest way possible, but also representative of what would have run through the character’s mind at the time. These characters live and breathe; they are multi-layered and hard to understand. This makes the final act of the film resonate on such a deep and human level that I doubt many viewers could come away without a long-lasting effect.

I know I’ve been dancing around the plot and any concrete details about what the film is about or what it contains. This is deliberate. I’d love for this review to introduce new people to this wonderful film, but it’d be a crime to spoil anything. I could sum up the entire film in a paragraph, but in a film like this a simple synopsis can’t convey the true power of the work. If you get a chance to see Made in Hong Kong, just do it. Don’t ask questions, don’t read the back of the box. Just do it. This is a truly special piece of work.