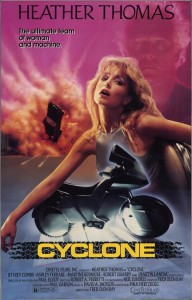 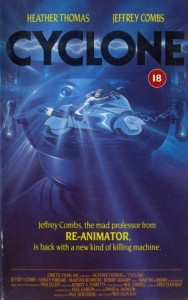 Sounds awesome, right? Trust me, it is. The previous words should be enough to sell you on tracking down this hidden gem, but if you want some more, I can oblige. Cyclone reminds me heavily of the kinds of movies that Full Moon Features produced during their most fertile years (the early to mid 90s), specifically Trancers II, but Cyclone delivers the action and thrills in greater quantities than most of those Full Moon flicks. Also as this is a several years prior to Full Moon and Charles Band producing those quality low-budget films, I have to wonder if the work of Fred Olen Ray influenced Band in any way.

While the film definitely has its down-tempo moments, I was never at a loss for entertainment. The acting is surprisingly good all around. Everyone has their shittier moments, but honestly for the budget this thing should’ve had way worse acting. And it has an incredible cast for a small film like this! Jeffrey Combs, Heather Thomas (I had no idea who she was, but apparently she had just finished a very successful supporting run on TV’s The Fall Guy), Oscar-winner Martin Landau, famed stuntman Dar Robinson (who also played the albino in the awesome, trashy Burt Reynolds flick Stick), and sons of famous actors Tim Conway Jr. & Michael Reagan as two hilarious, bungling cops. Everyone plays their parts to the letter, perfectly inhabiting this tech-savvy, villainous world.

There are a couple of notably bad performances though, mostly the later scenes from Teri’s friend played by Ashley Ferrare, and the action scenes involving an FBI agent played by Martine Beswick. She has to be one of the worst action actors I’ve ever seen, with a knee to a dude’s face that is so far from actually hitting him I might believe the film was about telekinetic powers if I saw it out of context. Heather Thomas also has her share of questionably good scenes, with the torture scene being both the worst and one of the best scenes of the film. It’s bad because it’s too long and obvious, but it’s good because of Thomas’s wonderfully over-the-top reactions to everything and all the clever ways she comes up with to tell the torturers to fuck off or shove the electric prongs up their asses. This scene leads directly to the final action scene when a hereto forgotten character kicks the door open with an uzi in one hand and a snub-nosed pistol in the other. Honestly, what’s not to like?

In addition to all that, there’s a couple of kick-ass car chases too! This is 1987 so the cars are real, the destruction is real and the explosions are fucking awesome. Have you ever wondered how a wood-paneled station wagon would fare in a chase with a $5 million dollar, military-grade motorcycle of death? Then look no further than Cyclone! The final chase scene features multiple motorcycles, multiple cars and the Cyclone is finally armed and ready to kill with its front-mounted lasers and back-mounted missiles. Oh, and let’s not forget the helmet equipped with some pretty heavy-duty lasers of its own and a fucking brutal fist beat down delivered by Heather Thomas in the closing moments. Goddamn, I love this movie.

But wait, there’s more! You also get a few impressive, meaty squibs exploding out of people’s chests as they take bullets like the hardened criminals they are. I swear, squibs like this look so fucking believable and awesome, I just can’t believe that abysmal looking CG blood has supplanted them in the film industry. Does no one care about visceral impact any longer?

By this point, Amazon’s servers should be teeming with orders for the budget DVD release of the film (which happens to also feature three other low-budget actioners), but for those still unimpressed I ask you this question: Where else can you find a film that offers so much entertainment to its viewer as described above AND has Jeffrey Combs asking Heather Thomas to recite scientific jargon as he moans and kisses her neck? Nowhere. Cyclone is a fucking piece of work and I had an absolute blast watching it. If Fred Olen Ray’s films are all of this quality then I have some serious fun ahead of me.

Couldn’t find the trailer, but this scene is pretty fun.