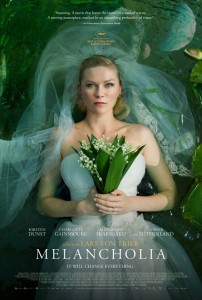 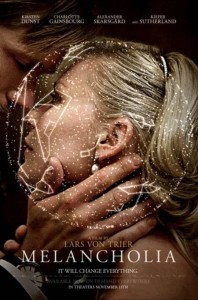 Well no, the film actually opens with a pseudo-overture with dreamlike slow-motion images and a deep, resonating classical score. This overture is quite long, going on long enough for me to wonder what my mental state would be like if the entire runtime of the film was like it. Thankfully, Von Trier cares more about narrative than some arthouse auteurs (coughTerrenceMalickcough), so after the overture we are introduced to our characters in proper scenes. Don’t get too excited about narrative though, as this one is actually pretty spare in that department. If you haven’t seen the film, I’d suggest doing so before reading the rest of the review as I’m about to break down a lot of shit in an attempt to figure out if I can find meaning amidst the slow-moving, boring nature of the film.

The film is split into two halves, with each half focusing on a sister. One is Justine played by Kirsten Dunst, the other is Claire played by Charlotte Gainsbourg. Justine is introduced to us happy, as she rides in a limo with her newlywed husband and they share some laughs over the driver’s inability to turn the limo on the tight corner of the gravel road. We soon realize that all is not roses for Justine, as she is unable to keep up appearances without drifting into deep fits of depression. She closes herself off from the party in her room, and even takes a bath while everyone waits for the couple to cut the cake. Her mother is coincidentally doing exactly the same thing as she has no use for people’s bullshit rituals, and her father is more concerned with the young girls populating his table than actually caring about his daughter or her wedding. The task of rounding Justine up falls on her sister Claire and Claire’s husband John (Keifer Sutherland). We learn here and there that Justine is deeply troubled by some apocalyptic visions, but she remains surprisingly calm and content with the whole thing. Looming over the event is the planet Melancholia, hidden behind the Sun for years and now possibly on a collision course with Earth depending on the scientist you’re listening to.

Part Two skips forward a bit in time (a few days, I think) and Justine is in some serious shit. She sleeps almost constantly, but Claire does her best to care for her and give her a safe place to stay. This, and the impending threat of Melancholia, causes Claire’s world to be turned upside down. She becomes more and more unraveled as the event nears, while Justine greets it with mere indifference. In her depression and her visions, she has lived through this catastrophe many times, so it does not scare or frighten here. As an opposite force, Claire has done her best to wall up her feelings and depend on the loving, reassuring words of her husband that “Everything will be all right.” 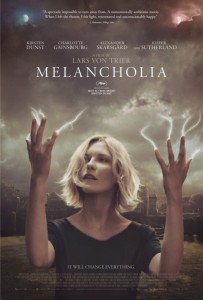 In the first half, Justine is in chaos over her marriage. Claire is the one in charge and doing her best to bring order to the chaos by sticking to the plan and the comfort of ritual. This is ultimately futile (she obviously didn’t watch Jurassic Park) and chaos wins out. In the second half, the roles switch as it moves closer to the finale, with Claire becoming erratic and chaotic as her world crumbles and Justine’s depressed calmness providing the balance and strength she needs. They ultimately come together in the ending and we are led to believe they died somewhat content with themselves, or at least their final moments. While Claire still seeks to cling to ritual and die with a glass of wine on the terrace, Justine provides the family unit with something unique and special, for this unique and special moment in their lives.

I feel like I understand the film better now, and what Von Trier is trying for, but seriously, does it have to be this long, drawn out and pretentious? It is not a fun film to watch, nor is it fast-moving. It crawls along, filling an over two-hour runtime, about half of which is just the wedding reception. I would venture to guess that this film could be at least a half hour shorter and still be of a similar quality. In any case, the film is long and not all that entertaining. Where the other Von Trier films I’ve enjoyed had deep characters that followed a satisfying, if depressing, arc, Melancholia‘s characters were somewhat shallow in comparison. Without understanding the symbolism, the film is just plain boring.

The artistry of a Von Trier film is never the shot selection and framing (most of his films are very handheld and organic), but in the way he brings deep emotional resonance to characters you’ve come to feel for. Melancholia has some fantastic moments (and ones that I can’t imagine playing as well at home without the grandiosity of the theater sound system) and I grasp the underlying meanings as well as I care to, but I just didn’t connect with the characters enough for any of it to matter much. I’m glad I saw it, but I can’t imagine ever sitting through this one again. This is definitely Kirsten Dunst’s finest performance though, and Charlotte Gainsbourg & Keifer Sutherland were pretty damn good themselves.