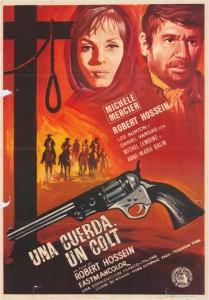 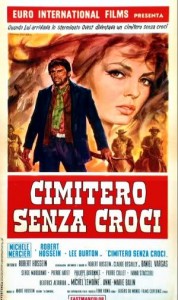 While I wasn’t particularly taken with this movie, it is incredibly well shot and edited. Where a lot of Spaghetti Westerns were obviously produced as quickly as possible without much care being taken to create a lasting, worthwhile experience for the viewer, Cemetery Without Crosses is clearly made with passion, heart and a wonderful knowledge of visual filmmaking. There’s hardly any gunfights in the film, but each one is handled perfectly, with quick editing and heightened tension to grasp the viewer. The film is dedicated to Sergio Leone and it’s scenes like this where I see his influence the most. He also apparently directed the dinner scene of the film, which is oddly enough, one of the best scenes in the film.

The music by the director’s father, André Hossein, is exceptional, adding a wonderful and much-needed flare to the film. The main theme is repurposed in many ways throughout, from a rousing opening number with vocals, to a plaintive guitar version for the more quiet moments. This theme reworking is masterfully done and adds so much to the film’s experience. It’s a good thing that the music is as enjoyable as it is, because long sections of the film are virtually music videos for the score. You’ll become very familiar with the main theme and you just might find yourself absent-mindedly humming it to yourself later in the day.

Cemetery Without Crosses is definitely more introspective than your standard genre film, but never in a preachy, overly dramatic way. The lack of dialogue allows the viewer to ponder every moment and consider the ramifications of what has happened on-screen. So yes, this is the thinking man’s Spaghetti Western, and if you’re looking for that type of thing, then look no further! For me it was kind of boring, and the musings I had on revenge (and revenge films) in the spaces between scenes weren’t revelatory enough to make me consider this in a greater light. It is a very well made, respectable Euro-Western though, and one that is highly regarded by genre fans. So don’t necessarily take my word for it, watch it for yourself!