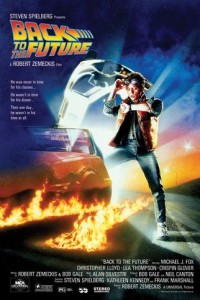 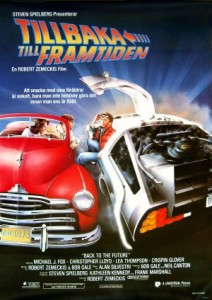 Director Robert Zemeckis shoots the film with style, creating believable versions of the Hill Valley setting in both 1985 and 1955. What is nothing more than a varied set dressing comes across as a wondrous discovery for the viewer. Like Marty in a strange land, we are whisked into the past and having already become familiar with some of the town’s landmarks, we enjoy the transition as he does, as an outsider from the future. In this sense, Back to the Future is a grand fantasy of wish-fulfillment for anyone that has pondered on the merits of time travel and the wonders it would hold to see your town in the past.

Michael J. Fox plays the role of teenager Marty McFly to the letter, but for my money the man who truly makes this movie fly down the road leaving trails of fire is Christopher Lloyd. His Doc Brown is the lightning rod that the plot revolves around and his over-the-top charismatic performance is brilliant. Generally over-the-top would be a negative for an acting performance, but Lloyd sells it as a characteristic of Doc Brown so well, that any incredulity is easily overlooked in the fun of it all. I don’t want to slight Michael J. Fox though, he fucking nails it. The film would simply not be what it is without his plucky likability and I’m glad they ended up going with him instead of Eric Stoltz.

The special FX are incredibly well done, with literally every moment still holding up and delivering the intended response from the audience. I’m much more critical of these things in my adulthood, but even looking for flaws I was hard pressed to find many. There are a couple of obvious mattes, but if you’re wrapped up in the film and not specifically looking for them, you’ll most likely never see them. For special FX to hold up as well as this twenty-six years after release is pretty astounding. I can’t imagine many films from our current era holding up as long as this (and honestly, many 80s films don’t hold up either). One thing I did notice about the FX this time around is just how little there are. It’s a film that hinges on how well its FX sell the film, but there are only a handful of shots that include something other than a physical prop on set.

Another aspect I must mention is the score by Alan Silvestri. For my money, this is one of the greatest scores of all-time. Instantly iconic and memorable, Silvestri’s music evokes the emotions of the characters, the dire consequences of a misstep, and the intensity of the moment all at once. I’m a big fan of Silvestri’s work from this era, and you can hear shades of later scores for films like Predator in the militaristic drum work in certain cues. In my eyes, this score should be regarded alongside the likes of Williams’s work on Raiders of the Lost Ark or Star Wars. There has never been better music to throw on while driving and accelerating to eighty-eight miles per hour.

And as awesome as the entire film is, the final ten minutes or so are just a non-stop ramp up of absolutely incredible pay off, culminating in what is easily one of the best cliffhanger endings of all time. The ending still makes me smile from ear to ear in appreciation of just how well done and exciting it is. It truly doesn’t get any better than Back to the Future, and after re-watching it once again tonight, I stand by my claim that it is one of the only truly perfect films from start to finish.