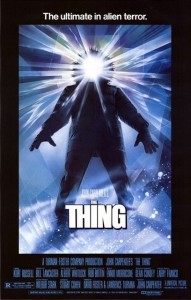 The Thing is a film made and set in 1982, but it feels timeless. Sure, there are computer displays in shades of green modern LCDs only dream of capturing, and nobody these days wears hair quite so bushy as the team members here, but none of this detracts from the power of the film. It is a testament to the fact that good filmmaking is timeless, that a well-constructed film can live on in spite of a few aging technologies on display. It’s really a brilliant forethought to actively place the film in 1982 instead of the vague “Present Day” that so many films fall prey to. In this way, it did and always will represent the time it was intended to, not to say that there’s much here that’s inherently 80s. What is firmly rooted in the 80s are the special FX. After this latest re-watch of the film, I am once again floored at just how awesome Rob Bottin’s FX work is. They are nothing short of incredible and are perhaps some of the best on-screen FX cinema has ever seen. To this day, nearly thirty years later, they still hold up remarkably well, even if I do hold a strong bias towards old-school physical effects work.

The music by Ennio Morricone is perfectly atmospheric and heightens every mood it tries to elevate. I’m particularly fond of the synth-driven main theme, which manages to evoke Carpenter’s own musical style as well as a human heartbeat, something that plays into the film’s tension and off of the audience’s experience with it. The score is truly masterful, counterpointing the stark, icy visuals with their sonic twin, and perhaps even more impressive, shows Morricone’s ability to create a score that sounds unique and not at all reminiscent of his past work. I’m a huge fan of Morricone, and this score only further solidifies my feelings. I’m listening to the score as I type this review up, and yeah, Morricone is the shit. But you already knew that, right?

The acting from all involved is excellent and never veers into the over-the-top territory that might plunge a movie like this into off-putting waters. Russell is especially good, as are Keith David and Wilford Brimley. No one is really given much to go on character-wise, but for this film it works, allowing the survival instinct to take charge and the audience to experience the fear of the team first-hand. A more defined group of characters would allow the audience to sit back from the carnage, with the character depth as a buffer. I don’t expect to make this argument against character development much, but for The Thing it was absolutely the right choice. One other actor is worthy of noting: the dog. Yes, the dog that starts the whole film off. The acting by this dog is more emotive and nuanced than many human actors I’ve seen. His best scene comes when he is placed into the kennel with the other canines, his fears, his violent nature, his inhuman desires all brimming underneath the surface. Seriously, this dog is awesome!

As this is a review I must be critical, even of films that I have a total blast with. Where The Thing loses a bit of its magic is in the third act, when there are a few logic jumps and the pace quickens dramatically. As a piece of entertainment, it works like a charm, but there are moments when the actions of the characters aren’t what you’d expect an intelligent human to do. In the face of such insurmountable odds I can’t say that I’d make rational decisions either though, so for me at least, these problems are easily forgettable.

The Thing is absolutely essential viewing for horror fans, sci-fi fans, oh fuck it, for all film fans. It is a shining example of its blended horror/sci-fi genre and the masterful cinematography and direction truly push it beyond most other films like it. The FX stand tall as some of the most impressive and most disgusting gore work of all time, and they are a big reason why The Thing is a success. It is both a “monster in the shadows” and a “monster in plain view” film, and it’s a perfect example of both.

Come back tomorrow as I finish out Horrific October with one last horror film!