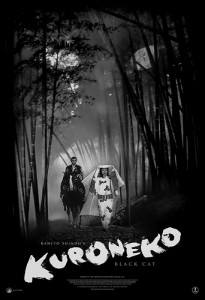 Kuroneko is much more of a horror film than Onibaba was, and with less of an arthouse vibe it is more easily accessible as well. The ghosts drink their samurai victim’s blood by violently biting at their throats. They leave their victims on the side of the road, in the middle of the street, in the forest, and sometimes throw the bodies off the huge gate onto the street below. Scavenger peasants raid the bodies for valuables, much like the female protagonists of Onibaba did for their own survival. I like to think that within these moments of desperation, the unnamed extras are living out their own personal versions of the survival tale told in Onibaba, simultaneous and in the background of the main story of Kuroneko. Real life is like this, with everyone on their own personal path, and these small details in Kuroneko help to make the film that much more realistic while it still retains the supernatural elements that make it what it is. 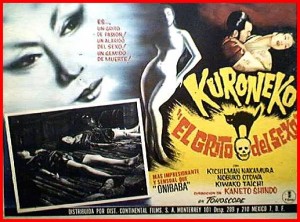 When Kuroneko does go heavily into this supernatural territory, it absolutely shines. In my review for Suspiria, I commented that the finale contained some of the best supernatural filmmaking of all time. Here I submit Kuroneko for a similar award, as the sequences when the ghosts act truly ghostly, are nothing short of awesome. They effortlessly fly across the screen and shimmy up tree trunks, aided by jump-cuts and clever angles that make the act more unnatural and unsettling than it already is. These displays of power come in very small amounts through the film, serving more as punctuation, so don’t go in expecting a non-stop barrage of flying ghosts.

The film looks incredible as well, with stylized, expressionistic lighting design that allows actors to fade in and out of existence based on their movement within the set. The black-and-white cinematography is second-to-none, with deep blacks and luscious white fog creeping out over the ghostly residence of the Kuroneko ghosts. If Onibaba was a visual feast, Kuroneko is an equally lavish banquet filled with the finest in cinematic nourishment. The ending is one of the greatest moments of the film, absolutely gorgeous and slightly ambiguous, featuring masterful shots and cinematography.

Special mention must be given to the scene in which the returning samurai is bathed and cleaned up. He has been fighting in the muddy swamp battlefield, running for his life from a famous general wielding a giant, spiked club. He triumphs and returns with the general’s head. He is rewarded with a new title and a new job, but first he must be bathed to get that caked on mud and filth from his body. Women fill buckets with steamy water and pour it over the samurai’s head. Cut to: a first-person shot of running water, like looking at the back of a waterfall from inside a cave (or at least what this should look like if films are to be believed). Cut to: the samurai’s face, slightly cleaner. This sequence repeats a few times until Shindo ends it by cutting directly to the clean-cut samurai dressed in fine linens and riding a horse. It’s a brilliant sequence.

Compared to Onibaba, Kuroneko is probably a better film in terms of technical achievement and directorial skill exhibited by Shindo. Onibaba has a rawer energy and a deep, symbolic nature to it that for me propels it beyond Kuroneko‘s more straight-forward story, but at this point it’s more splitting hairs and personal preference than anything else. Both films are incredibly well made and are worthy representations of top-notch 1960s Japanese cinema, and I look forward to exploring more of Shindo’s films. He’s still making them at 99!

Come back tomorrow as Horrific October continues with another from Hammer, 1959’s The Mummy!