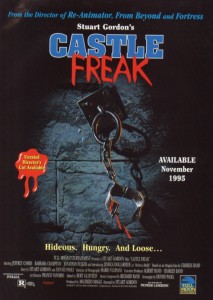 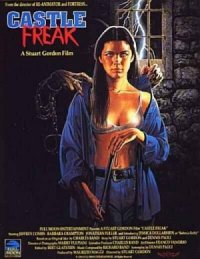 It starts off great too, further setting me up for disappointment. The film’s opening, depicting the death of the Duchess, is artful and interesting. The camera deftly follows the elderly woman as she feeds her cat and then they both descend into the castle’s nether regions. This leads into the slow, metered reveal that there’s a man chained to the wall. He’s only shown in shadows or in careful shots that capture only a small portion of his body, creating a wonderful, mysterious vibe about the character. This whole opening is virtually dialogue free as well, contributing to the atmosphere and mood of the piece.

When Combs and the fam get to the castle, the halls are filled with the sounds of their words echoing off the vaulted ceilings. While this echo is probably more a result of the low-budget filmmaking, it adds considerably to the feeling of being in a castle and helps the picture out quite a bit. What’s very interesting about this one, is just how much it doesn’t feel like a Full Moon picture. Combs and Crampton are a couple estranged, split apart by tragedy but trying to hang together for the sake of their daughter. I don’t think I’ve ever seen any Full Moon film attempt this level of true human drama, and for this, Castle Freak must be commended. It never reaches fantastic heights or covers any ground you haven’t seen before, but just by virtue of trying (and succeeding) Gordon has done something special. He’s created a Full Moon picture that goes beyond the traditional scope of the Full Moon picture. He had done this before with smashingly great results in The Pit and the Pendulum, so it’s a shame that Castle Freak doesn’t reach those heights. It isn’t for lack of trying though.

About a half hour in, the film kick-starts itself from being a simple family drama to the horror movie you know it is, by having the Castle Freak break out of his cell. This breakout scene is easily my favorite scene in the film, featuring some incredible editing when the Castle Freak must remove the shackles from his hands. First he tries ripping the chain from the wall, like Sloth from The Goonies. The Castle Freak didn’t have the nutritious diet of Baby Ruths and vegetable platters though, so he is unable to break free. This leads him to look down at his shackled hands and try removing the cuff by pulling it over his hand. Damn, it just won’t come off… if only that thumb wasn’t there, getting in the way. You or I might stop here and slump down against the wall in defeat. The Castle Freak instead bites into his own thumb, ripping the muscle enough to allow him to bend it unnaturally. He pulls the cuff upwards, further ripping into his thumb meat, tearing more away but freeing himself in the process. This is all shot from a first-person POV perspective, adding to the intensity and the feeling of being there. The scene is skillfully edited to accent each development in his escape, instantly reminding me of the tense climax in the pendulum room in The Pit and the Pendulum.

The special makeup FX of Castle Freak are second to none. The Castle Freak is basically a dude in a full-body makeup suit and it looks perfectly seemless. The gore is also incredibly realistic and proves to me once again that physical FX trump CG as the effect of choice for horror films. If only modern filmmakers felt the same way! That being said, because the story wasn’t anywhere near as intoxicating and enjoyable as other Stuart Gordon films, I felt that a lot of the gore/FX were done more for shock value than for more valid reasons. I respect that they had the balls to have the Castle Freak nude throughout the film (he does wear a sheet at times), but I’m unsure if a lingering shot of his scrotum was entirely necessary.

The acting is above par for Full Moon as well. Jeffrey Combs is more subdued than he’s been in past Gordon films, but it fits the role and shows his ability to do a lot more than get a wild Herbert West look in his eyes and perform unneeded surgeries. Barbara Crampton is equally impressive as well, and their tense marital drama scenes together are well done. Stuart Gordon’s camerawork is impressive, this time around incorporating lots of handheld and first-person POV shots from the perspective of the Castle Freak. This lends the film (and the Castle Freak) something of an Argento feel.

Castle Freak doesn’t feature the frenzy of Re-Animator or From Beyond, nor does feature the nail-biting tension of The Pit and the Pendulum. Instead it contains elements of both, but neither dose is potent enough to create a truly great film. There’s a lot of potential here, but it just doesn’t add up to a lot in my book.

Next week, the final film before Charles Band created Empire International, the 3D Sci-Fi extravaganza Metalstorm: The Destruction of Jared-Syn!