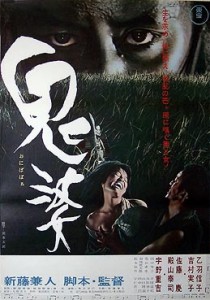 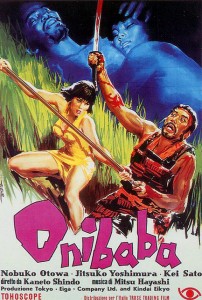 The film opens without dialogue as the two women kill a pair of samurai. As the tall grass sways beautifully in the wind, the women undress the dead men and drag their bodies to the hole. Actually no, the film opens with the hole, and on-screen writing describing how the hole is deep and dark, and “its darkness has lasted since ancient times.” This then leads into the murders described above. As it opens the film, the hole informs both the viewer’s interpretation of the film and the character’s motivations. Its deep and dark nature permeates the women’s souls, most specifically the elder woman who feels that she has no worth in this world that values young, supple flesh.

As the film moves along, and the young woman accepts the advances of Hachi, the elder woman becomes more and more distressed. In her desperation she goes to Hachi herself and offers her body to him, stating that “she’s young on the inside.” He refuses her, throwing her into a deeper depression. She resorts now to manipulating the girl into thinking that her wanton desire for sex with Hachi will send her to the deep pit of hell in the afterlife. At this point the older woman describes hell to the girl, resulting in a fairly accurate description of the horrors that awaited the characters of last week’s film Jigoku.

At the moment of absolute desperation for the elder woman, a lost samurai wearing a horrific demon mask comes to her hut. He seeks the road to Kyoto but cannot find it amongst the grass at night. He persuades her to lead him to the road, but she doesn’t have a shred of goodwill left in her body. She leads him to the hole and lets him fall to his death. She then descends into the pit both physically and symbolically, retrieving his armor and his demon mask. The mask doesn’t come easy though, as it has somehow become attached directly to the skin of his face. She rips it away, revealing the scarred tissue beneath. Red flag, perhaps? 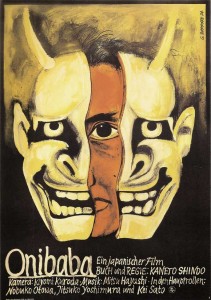 Onibaba is visually very impressive, with gorgeous & shadowy low-key lighting and wonderful uses of editing and slow motion. There’s a three-way conversation that occurs early in the film between the leads that is a classic example of using blocking to create a triangle between three people. Each shot reinforces the tension between the three, as their actions in the film place them within a three-pronged conflict. There’s not a single over-the-shoulder shot in sight and I couldn’t be more happy. I don’t notice this triangle shooting technique a lot in films, but one of the more notable examples is Kurosawa’s Rashomon.

The entire film was shot within the tall, susuki grass and the nearby river. Throughout the film, director Kaneto Shindo cuts to this grass swaying in the wind. Many of the scenes also take place at the river’s edge. As the older woman seeks to psychologically hold onto her own youth, and physically hold the youthful woman who lives with her, the shots of the wind-blown grass and the flowing river remind us of the impermanence of life; that it is a river rolling onwards, a thicket of grass moving with the wind and not a static, deep, dark hole in the ground, as it has become for the elder woman.

In the intro to the anniversary edition of Clive Barker’s Books of Blood v. 1 – 3, he mentions that Onibaba (among other films) influenced him greatly and after watching the film it is easy to see why. Onibaba walks the line between sexuality and horror, murder and love, death and life. Barker too walks this path in many of the short stories in the collection, albeit in his own, very horrific ways. Onibaba is a masterpiece of arthouse Japanese horror cinema and is sure to please fans that enjoy brooding Japanese films of the 60s. The film is based on a Buddhist parable and as such, it isn’t really structured like a traditional horror film. It’s really more of a morality drama with horror elements, but one that is incredibly successful in achieving its goals.

As another word of warning, this trailer shows quite a bit of spoilers as well.


Come back tomorrow as Horrific October continues with another from Hammer, 1961’s The Curse of the Werewolf! And next Wednesday, I’ll be looking at another Kaneto Shindo film, Kuroneko!