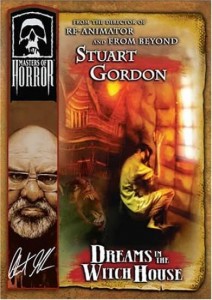 Another week, another episode of Showtime’s Masters of Horror. After last week’s frustrating entry, I questioned if watching the rest of the series was worth it. My love of Stuart Gordon won out though, as the second episode was directed by the man who brought the world Re-Animator, From Beyond and Robot Jox. And who better to bring H.P. Lovecraft to the small silver screen than his most faithful adapter, Stuart Gordon? After watching the film: no one, that’s who. Dreams in the Witch-House proves once again that Stuart Gordon is one of the premiere horror directors (and one of the most underrated).

The story concerns a college student named Walter who takes a room in a run-down house so that he has a quiet place to study and write his thesis on string theory. The evil look of the house and the shady manager should have clued Walter into something fishy, but alas he’s a horror movie protagonist so of course he moves in unheeded. When strange things start to happen and the rat with the man’s face tells Walter that “She’s coming for you!”, he’s in too deep and nothing can rip him away from the interdimensional shenanigans that threaten his building.

There are shades of the similar claustrophobic shooting style here as in Incident On and Off a Mountain Road, but once again this is a Full Frame cropped version of the film I’m watching, which only makes such issues more pronounced. I will say that Gordon’s camerawork is decidedly more classic in nature and much more pleasing to me than Coscarelli’s work in the previous episode, but it is interesting to note that the same cinematographer (Jon Joffin) shot both episodes, and both films share a very similar lighting design and look. This look is one of my least favorite aspects of the series, with presumably natural light streaming in from the windows and blasting the room in a white, hazy glow. It betrays the film and makes it look a lot lower budget than it deserves to look. Gordon does inject a lot of style into this episode with clever, careful usage of slow motion and near-perfect editing during the intense climax. He successfully gets me on the edge of my seat, biting my nails and screaming in horror and while it’s not as effective as the finale to his earlier film, The Pit and the Pendulum, it is above and beyond the thrills that most horror films promise.

The gore is incredibly well done and satisfying. KNB once again contribute FX and their work ranges from squirm-inducing flesh ripping to bountiful gushes of deep red blood. These moments of gore are used to perfection, expertly punctuating the feeling of dread and general creepiness that permeates the film. The music from Richard Band also accentuates the positive and keeps the viewer enticed for more scares. For all its Full Moon cred, I’m surprised to see that Charles Band is in no way related to this one. Even so, his spirit lives on in the work of many of his past collaborators and the film is definitely one for Full Moon fans to check out.

Ezra Godden plays Walter with an energy and a look that reminds me of Jeffrey Combs in Re-Animator. He’s not as wily, but he’s as believable and he fits the film like a glove. The rest of the cast plays off him well, with Campbell Lane providing a wonderfully nuanced performance as the old man living downstairs. I had pretty average expectations for this, but Stuart Gordon surprised me once again, crafting a skillful, exciting, creepy film that gets under your skin and crawls around for a while afterwards. Admittedly, it is a bit campy in spots (such as the man-faced rat) but Gordon handles such challenges so well that most people should be able to look past this minor fact and enjoy the film. It had me laughing and yelling at the screen, which is basically the highest compliment I can give a horror film. I wholeheartedly recommend this to Gordon fans and those who like macabre, gory horror stories where reality is in question. H.P. Lovecraft’s Dreams in the Witch-House is a dark, twisted tale and it’s so, so much fun.

Come back next week as Horrific October continues with Charles Band’s 3D horror flick from 1982, Parasite!