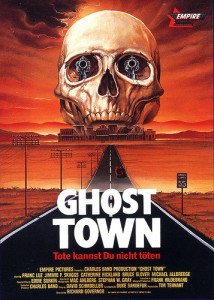 A woman drives her fire-engine red Mercedes down a desert dirt road. Her car breaks down, as the sound of chasing horses envelop her and crows look on with hungry eyes. She is alone in this forsaken world, stuck with a long walk ahead of her to the nearest civilization. A dust cloud picks up and ominously moves towards her. She screams and the last thing we see is the woman dragged against her will away from the car, her hands grasping and clawing for purchase but finding nothing but wind-blown sand.

YEAH! That’s how you start a movie! Mysterious, interesting and exciting, the opening of Ghost Town sets up the rest of the film perfectly. Soon after, we meet out hero Langley (Franc Luz), a sheriff’s deputy doing some mean target practice complete with slow-motion shots of target piggy-banks and beer bottles exploding. He soon finds himself hot on the trail of the horseman who kidnapped the girl, and after walking most of the day through the desert, he arrives at a ghost town. Just outside the town he finds the tombstone of the sheriff. When he kneels down to investigate it, two skeletal arms shoot out to grab him and the zombie sheriff warns him of the danger he’s about to get himself into. It is here that many will find themselves reaching for the stop button, but for those that just shouted, “Fuck yeah!”, please continue along with me. 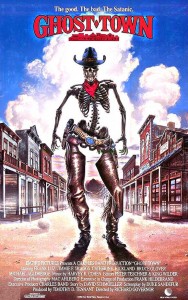 The first half of the film continues on in this way, with Langley searching around the old town looking for the kidnapped woman. The villain is still shrouded in mystery at this point and the inhabitants of the town fade away at a moment’s notice. After this mystery is dispelled, the film loses a lot of the steam it had built up, going from a good, creepy horror western to a rather paint-by-numbers sheriff vs. villain showdown movie you’ve seen countless times. Sure the zombie nature of the villain and the fair amount of juicy R-Rated violence helps, but it’s not quite enough. Truth be told, I probably should have watched this before I watched Full Moon’s later entry into the Western genre, Oblivion, and if I had, I may have enjoyed the second half of this one much more than I did. Due to Oblivion‘s level of crazy, with its cameos and over-the-top special FX, I watched Ghost Town through a slightly tinted glass. Even still, Ghost Town is ridiculously watchable and fun and is definitely one fans of supernatural westerns will not want to miss, if you did in fact miss it upon release twenty-three years ago.

Mac Ahlberg’s cinematography deserves universal praise as it is easily the most defining part of this film and it is a big reason the first half of the film is so creepy and haunting. Streams of light shoot through the decrepit structure of a fallen windmill. Langley toils over the desert land as the orange hues of the sun beat down on him. The mysterious horseman shimmers just out of focus in the distance, but when Langley clears his vision, the man simply fades away. It is moments like these that create a wonderfully creepy atmosphere for the film, and I wish it carried through the entire thing.

In the end, Ghost Town is a hell of a lot of fun and is definitely one to track down. While I prefer the creeping atmospheric sections, the man vs. ghost bandit section is pretty fun too. The film manages to fulfill both the trashy side and the artful side in one fell swoop, and for that, it should be applauded.

Next week I’ll be jumping back into Full Moon’s kids line, Moonbeam Films, with a look at the subtlely-titled, existential arthouse romp Teenage Space Vampires! See ya then!