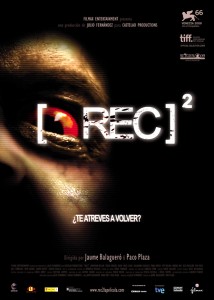 The problem is about half way through the movie, there’s a ridiculously contrived event that forces the story in a completely different direction, changing not only the focus of the film, but the point of view from which we experience the film. One of the strengths of [REC] was the singular P.O.V. that limited your knowledge of the events to only what you and the characters were personally experiencing. So when they break that in [REC] 2 it ruins a lot of the magic. And then in an even more bullshit move, they do another similarly contrived event to get a camera with night vision into the hands of the characters, presumably for no other reason than to recreate the most frightening moments towards the end of [REC]. Yes, it works and I liked a lot of what was done in the night vision sequences, but it never feels natural. That’s really my biggest beef with this sequel, it feels like something thrown together to capitalize on a surprisingly successful film when no sequel was originally planned. For the first half, I thought they might succeed despite the jump into more supernatural terrain, but it quickly devolves into a mess that I just wanted to be over.

I can’t imagine that the pair of announced sequels will be anything worth watching either. The end of [REC] 2 sets them up to be nothing more than your traditional “über monster vs. a sea of stupid humans” movie. Funnily enough if they wanted to, the ending also sets the sequels up so that they could reconnect with the timeline of the American remake sequel, Quarantine 2. Not that I’ve seen either of the Quaratine films, but the first trailer the [REC] 2 DVD plays when inserted is Quarantine 2. This seemed to color my viewing, as I was thinking throughout how ridiculous that trailer was compared with [REC] and its true sequel, regardless of [REC] 2‘s quality in my eyes. Imagine my surprise when the closing moments of [REC] 2 could easily be extrapolated in such a way if they wished it. I doubt this will happen, but it’s fun to think of.

[REC] 2 is not so much a poorly made movie, but it’s one that really doesn’t need to exist. If you enjoyed the first [REC] for its building sense of terror, don’t bother with the sequel. On the other hand if a shaky-cam Exorcist sounds cool to you, then you might want to check this one out despite my indifference.