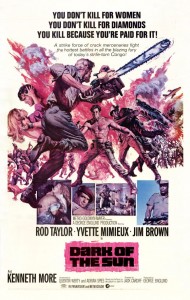 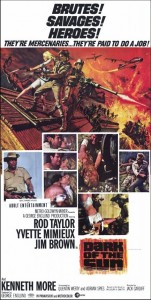 Heroes isn’t necessarily the best way to describe them though. They are mercenaries and each has their own motivation for carrying out the mission. Rod Taylor is in it solely for the money, while Jim Brown has a more noble desire. The doctor just wants a case of whiskey and the peace to enjoy it. Within these men’s motivations lies the real heart of the picture, as this film is much more than it appears on the surface. I don’t want to give anything away, but suffice it to say that I was very impressed with the way the film ended and tied everything together in a way wholly different than expected.

As for the action, it’s pretty awesome! This is definitely late 60s action so some of it doesn’t look as kinetic or visceral as today’s firefights, but the majority of it still packs a punch. The explosions are big, fiery and loud, but it’s the fistfights that pack Dark of the Sun with its most volatile energy. The film features two intense brawls that rank among some of the best I’ve seen on film. One of these fights escalates to one man grabbing a chainsaw and nearly slicing the other in two at the waist. This is one tussle I won’t soon forget and a true highlight of the film. Not to rest on their laurels, the climax of the film features another stunning hand-to-hand brawl that succeeds in containing the same murderous spirit, but keeps the power tools on the sidelines. These mercenaries deal in death on a daily basis, so it only makes sense that when they fight amongst themselves their rage would explode in such over-the-top fashions.

Most of the film was shot on location and it looks fantastic. Director Jack Cardiff is one of the greatest cinematographers of all-time, shooting such masterpieces as The Red Shoes, The African Queen and Rambo: First Blood Part II. His directorial eye is great as well, with every inch of the CinemaScope frame utilized in the best possible way. The color depth is especially gorgeous, a testament to the impeccable quality of the cinematography and lighting.

Dark of the Sun starts out as a well-intentioned “men on a mission” film, but the path it treads gets progressively darker as the film moves on. If you want to see a well-planned operation descend down the rabbit hole into one fucked up situation after another, each more dire than the last, then Dark of the Sun is perfect Saturday afternoon fare for you! Due to the film’s extreme violence for the time, it has been overlooked and gone largely unseen since its release, but thanks to the good people at the Warner Archive you can now own a beautifully remastered DVD of the film! Highly recommended.