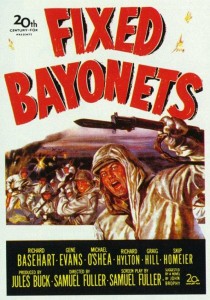 A regiment of US soldiers is behind enemy lines and needs to make their way across the only bridge out of the area. In order to do so, they need a diversion. One platoon of about twenty guys stays behind as a rear guard, hoping to hold back the enemy long enough for the regiment to make it across unscathed. What follows is a harrowing military action film, as each man in the platoon fights for their survival with death looming heavy over every action of the small group of men.

At the heart of the tale is Cpl. Denno (Richard Basehart) who freezes when faced with an enemy in his sights. It goes unnoticed by the others, but the nervous fear continues to weigh heavy on Denno as he is fourth in command, and any man can easily catch a bullet in these circumstances. Sure, it’s a rather simple war yarn, but its realism and attention to infantry life detail are the real shining moments of this film. Like The Big Red One‘s episodic nature, Fixed Bayonets! has a similar quality in the way it portrays the platoon entrenched on the snowy banks of the hill they defend. Instead of a strict plot, it’s more of a down time/up time routine where men bond in one moment and die in the next. Survival and the ever-present smell of death are never far from the viewer’s mind while watching Fixed Bayonets! and that’s what makes this one of the best war films I’ve ever seen.

This is a much more action-packed film than The Steel Helmet, which is understandable considering the budget differences. Fuller expertly utilizes the money and time given to him by having a major studio backing his film, as the film features incredible camera & crane work and some of the best explosions early war films have to offer. Every rattling mortar blast literally shakes the screen, adding an extra layer to an already impressive film. The sets themselves are also incredible pieces of work. While at times it’s clear that they are Hollywood sound stages, they still create a wonderful illusion of snowy hillsides and mountain ranges. There’s also a stunning cave set that looks beautiful in its ragged, natural state and I had to remind myself several times that it was only a set.

One particular shot showcases the masterful crane work and the sets when Sgt. Rock (Gene Evans) walks out of the cave, conversing with one of the men. Shots ring out and Sgt. Rock quickly returns suppressing fire before climbing down the side of the cliff as quickly as possible, running across the canyon floor and up the other side of the hill. Inside a small slot an enemy solider creeps out but is dealt with swiftly when Sgt. Rock bayonets him without remorse. He then climbs up further to yell at the men keeping watch on top of the hill. All of this is in one shot with the camera craning around the massive set, following the agile Gene Evans. 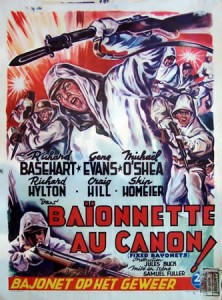 Evans starred in The Steel Helmet, but here he’s in a starring supporting role. He lights up the screen whenever he’s on camera with pitch-perfect delivery and a grizzled war vet look on his face. This guy was born to bark out Sam Fuller’s terse, hard-nosed dialogue. The rest of the cast performs admirably as well, with Richard Basehart holding down the lead role with ease. He’s the main character, but realistically Gene Evans is more prominent and on-screen a lot more than him. This exemplifies Fuller’s dedication to the platoon, the fact that no one man is the hero or the distinct star. Everyone has a place and an identity and each man is as vulnerable as the next.

When characters die in Fixed Bayonets! there aren’t any drawn-out moments of dramatic clawing at their wounds or extended speeches from their death beds. If a man is shot dead, he drops dead right where he stands without a hint of dramatic flopping. One character’s death in particular is quite harsh, as he tells his fellow soldier’s not to bother bandaging him as he is dead and then goes silent waiting for a response. When the other men look up they see that he sits with a glassy stare in his eyes, motionless and unmistakably dead. There is a power in this quiet moment that no amount of dramatic posturing could muster.

There’s more war drama and exciting action packed into the slim ninety-one minute runtime of Fixed Bayonets! than in most three-hour modern war epics. It is a testament to the power of Fuller’s craft that a film he made sixty years ago still has this amount of power and gravity to its scenes. Fixed Bayonets! is one of the great war films of the 1950s and you’ve probably never even heard of it. Highly recommended.