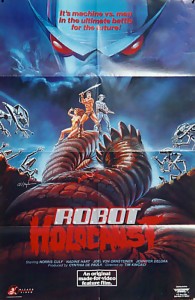 The line between science fiction and fantasy is one that very few stories dare to cross. This trepidation is with good reason, as the two nerd camps don’t usually have a lot of crossover. Sometimes though, a film comes along that has real balls. These films usually go with the kitchen sink approach, such as last week’s Eliminators, and Robot Holocaust is a film that features a very similar philosophy. The setting is a post-apocalyptic world where robots rebelled and almost destroyed society. It is now controlled by the evil “Dark One” and his minions Valeria and Torque, who take a mysterious man hostage. His daughter hooks up with the nomad Neo and a bunch of other dudes and they go on a quest across the barren wasteland to vanquish the Dark One and rescue the kidnapped man.

This might make Robot Holocaust sound like an interesting, enjoyable movie. And it is in its way, but a true appreciation of shit movies is needed for the film to ascend to this level. Chances are if you’re watching a movie called Robot Holocaust, you’re pretty well dialed in to the mindset needed though. The acting is ridiculously bad from everyone except maybe Norris Culf who plays Neo, but I wouldn’t go so far as to say that his acting is good. Robot Holocaust also features a robot sidekick named Klyton, who is basically C-3PO. It’s interesting to me that last week’s film Eliminators featured a rip-off R2-D2, and this one features a budget version of his wordy companion. I honestly didn’t know going in, but it definitely added something to the experience. 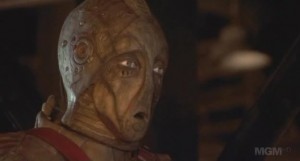 Technically, the film is about as misguided as its acting with boring shot selection and subpar framing. It does gets the job done without being annoying, so it should be recognized for that at least. The music is directly lifted from previous Charles Band films, mostly Laserblast and The Alchemist (I think). While this is obviously a cost-cutting measure, the Laserblast music seems to fit this film better than it fit Laserblast.

So if everything in the film is “passable” and “OK” why should anyone watch this damn thing? It’s fun as shit, that’s why! I’m a big fan of both science-fiction & fantasy and this film surprisingly blends the two genres well enough to work. The group of heroes on their way to assault the Dark One’s Power Station dress in fur boots and rag loincloths, doing their best Conan the Barbarian impressions. There’s forest-dwelling warrior women also, but perhaps the funnest aspect of the overall production is the narration. The narrator jumps in at key moments throughout the film to add in bits of information and color to the experience. Sure, narration is lazy filmmaking but it’s a staple of good fantasy cinema and Kincaid uses it perfectly in Robot Holocaust. 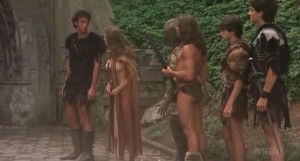 For anyone that’s seen Breeders (another Tim Kincaid joint) you might go into this one with an expectation of lots of gratuitous female nudity. Surprisingly there is only one scene that fits the bill, but it’s one of the most enjoyable in the film. The Dark One’s minion Valeria (the beautiful Angelika Jager in her only on-screen role) cautiously walks up to the cleverly titled “Pleasure Machine,” an octagonal, foggy chamber with a cage-front and an ominous red glow. She steps inside and disrobes, while a nude male and female hold a plasma globe in outstretched hands. Valeria strokes the globe and then slowly turns, the two nude figures interpretive dancing in front of the chamber. It’s a fantastic WTF moment and truly captivating.

My favorite scene in the film was without a doubt the sewer worm sequence though. The heroes have ventured long and hard, and must travel through the subterranean caverns so the Dark One cannot follow their movements. It seems like a good plan, until they enter the nest of the sewer worms! Oh shit! The sewer worms are essentially nasty-mouthed invertebrates protruding through holes in the wall. Neo has the best idea in his first worm kill, where he puts the worm behind him into a classic headlock before lifting its body up and sawing open the fucker’s neck. What a badass! The scene is fantastic, but the tension is ruined multiple times as the heroes focus on fighting one worm at a time as other worms, clearly in biting reach of the humans, look on. Perhaps they are frozen in fear as they see their brethren caught in head-locks getting their throats sliced open. Sewer worms have feelings too.

In any case, Robot Holocaust is clearly a very bad movie, but it’s one that rarely gets boring. There are tons of great moments throughout that will entertain big B-movie fans. I expected a pile of shit and I got it, but it is an enjoyable pile. The definition of good trash, camp to the max and I wouldn’t change a thing.

Next week, I’ll go into the penultimate week of my months-long trek through two of the biggest Full Moon franchises Puppet Master and Demonic Toys, with 2010’s Demonic Toys 2: Personal Demons!