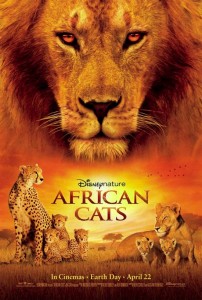 Expectations: Moderate, I like cats but I haven’t been too fond of the recent Disney Nature productions.

I’m a huge fan of nature, the Earth and all kinds of documentaries documenting the occurrences in the natural world. In this sense I enjoyed Disney Nature’s latest theatrical endeavor, African Cats, but I cannot simply leave it at that. The film relates the story of a river in Kenya and the two lion’s prides that control each side of the river, as well as the story of a mother cheetah and her five small cubs. As a premise this works, but in practice Disney chooses to dumb everything down into basic terms of good vs. evil, and instead of relating any useful information about these cats, it only shows the day-to-day struggle. The film has no goal, no message, and nothing to offer other than pretty pictures. One group of lions is viewed as the true rulers of the river, but one day when the river is low the evil, dark-maned lion Kali crosses the divide and attacks! Oh no! I don’t doubt that this constant push-and-pull goes on, but I don’t like the demonization of one group of lions over another. They are lions, not humans.

The music is atrocious as well. Even in its best moments, it is very derivative of Howard Shore’s wonderful Lord of the Rings score and for me that just doesn’t work over the plains of Africa. I don’t know, maybe the music should sound somewhat African? Evoke a place for God’s sake, and that place shouldn’t be Middle Earth. Most of the movie is heavily scored too, so the music is virtually inescapable. Equally and possibly more inescapable is the ridiculous narration. Samuel L. Jackson is not the problem, but the script definitely is. I realize that they’re aiming the narration at children and families, but do we really need nearly constant play-by-play commentary on the minutia of what we’re watching on-screen? Documentary narration should seek to impart some information that cannot be passed on through the visuals, adding something on top. Here it rarely goes beyond pointing out the obvious.

If nothing else, it is pretty to look at. The photography is excellent and does a wonderful job of capturing the animals of the plains in stunning detail. In addition to cats there are a wide variety of animals on display, from wildebeests to elephants. The focus is on the cats though, and in the film’s best moments it is a real treat to see little lion cubs pouncing on one another, or to hear all the different vocalizations of the cheetahs. I don’t regret watching African Cats, but I feel that what could have been a home run falls short because of its over-produced nature. Less (and better) music, less narration and it could have been great.