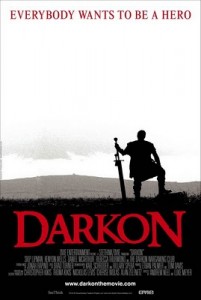 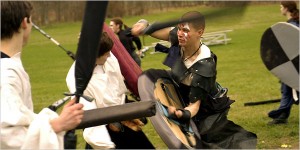 The cost to the player’s families should not be overlooked though. As the players are living out their medieval fantasies and subconsciously growing through role-playing, most of their families are stuck at home missing their father/husband or mother/wife. As one mother holds her crying child on the field of battle, noting that this was why she hoped to have her parents watch her son for the weekend, the irony of rejecting your child and causing future abandonment issues while connecting with your inner child in an effort to grow your adult mind is not lost on any careful viewers. There’s another moment where the main guy Skip plans his attack on the Mordom empire with a huge map of Darkon and a group of fellow players in his living room. His wife sits at a table adjacent holding their daughter’s hand, looking on with a longing stare that cries out for that passion and attention to be focused on her and the family. 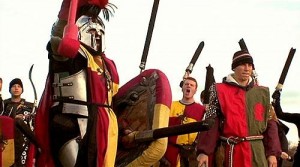 The driving force of Darkon is Skip and his struggles with the Mordom empire. They were allies, raiding and pillaging smaller countries in the name of empire and expansion. Nothing could stand in their way. Skip begins to feel slighted and used though, and wishes to overthrow the evil Mordom empire in the name of all that is good in the realm of Darkon. His forces are outnumbered, his skills are outclassed, but his heart is unlimited. The story of this underdog desperately fighting for his place in a hungry, villainous world is incredibly watchable and exciting. There are times when the foam weapons and the makeshift castles fade away and the fiction takes hold, thanks in part to the epic music of Jonah Rapino. His wonderful score could easily fit over any epic fantasy tale and lend it the grand, sweeping nature of something such as Lord of the Rings. It’s rare that independent, documentary films impress with their music, but the score here is worthy of accolades and major press.

Coupled with this great music are wonderful helicopter shots of the Baltimore area where Darkon‘s wars are waged. In some of the more inspired moments, overhead shots of suburban tract homes dissolve into similar shots of the hexagonal map of Darkon. The production values are high, but during the heat of battle some of the camera work gets a little shaky. All in all, Darkon is shot and edited very well though and it’s easy to see why this won a bunch of film festival awards. 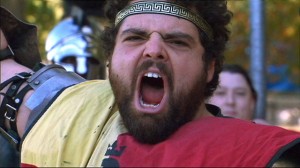 For those looking to Darkon to provide the laughs, it does… sort of. The filmmakers do a great job of simply presenting the world and the information surrounding it, without needlessly making direct fun of the people involved. If you find them ridiculous, you are free to laugh, but it never feels like it is edited to create laughs. In any case, there are definite moments of lunacy, when a widening of the eyes and a good chuckle are your best friends, but Darkon is put together well enough that it is able to draw you in and makes you care about the ongoing political upheaval that characterizes the world of Darkon.

For anyone interested in role-playing, live action or not, Darkon is a great movie that will expose you to a subculture you may have not known existed. Be sure to come back tomorrow as I take a look at another LARP documentary, Monster Camp.